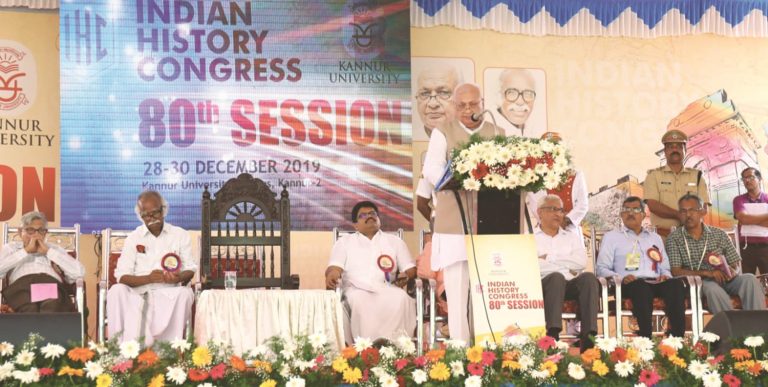 Kerala Governor Arif Mohammed Khan’s act of supporting the Citizenship (Amendment) Act is being seen as divisive and anti-constitutional. Has the time come to implement the Sarkaria Commission’s recommendations?

Kerala Governor Arif Mohammed Khan stirred up a row recently with his defence of the Citizenship (Amendment) Act (CAA) at the Indian History Congress in Kannur. His defence in a state that has voted to keep out the CAA drew sharp protests from some in the audience. He then proceeded to describe those protesting against the new citizenship law: “You are potholes filled with dirty water which is stinking,” who were left behind in India after Partition. “My duty as governor is to defend any law,” he said. This was “a sacred duty”, he added. He spoke about how Gandhiji was criticised too—although the relevance of bringing Gandhiji into this is somewhat unclear. The governor then alleged that 88-year-old historian Irfan Habib, a staunchly secular person, had simultaneously attempted to assault him.

Leave aside the unparliamentary language, this brings into question the constitutional duty of a governor. Governors have similar powers and functions at the state level as those of the president at the Union level. Governors exist as nominal heads, whereas real power lies with chief ministers and the council of ministers. Articles 157 and 158 of the Constitution specify eligibility requirements for the post of governor. Among these, it is clearly stated that a governor must not be a member of either House of Parliament or of the state legislature. In other words, a governor is not a politician.

Every governor takes an oath under Article 159. This is done in the presence of the chief justice of the concerned High Court and involves swearing in the name of God that he/she solemnly affirms that he/she will faithfully execute the office of governor of the state and will to the best of his/her ability preserve, protect and defend the Constitution and the law and devote himself/herself to the service and well-being of the people of the state. The governor also has rights under Article 200 with respect to giving assent to bills, but ultimately, he is obliged to give his assent even if it is returned unchanged. Under Article 213, the governor has the power to promulgate ordinances when the legislature is in recess, but they are liable to be void if they would not have passed muster as Acts. All actions, recommendations and supervisory powers are in order to implement the provisions of the Constitution.

A governor has executive powers related to administration, appointments and removals. He appoints the chief minister, who enjoys the support of the majority in the legislative assembly, and also the council of ministers and sees to the distribution of portfolios on the advice of the CM. While the council of ministers remains in power during the “pleasure” of the governor, it means as long as the majority in the legislative assembly supports the government.

The governor also appoints the advocate general and the chairman and members of the State Public Service Commission. The president consults the governor during the appointment of judges of the High Courts and the latter appoints the judges of the district courts. The governor is also the chancellor of most of the universities in the state. The dignity and impartiality of the office of the chancellor puts the governor in a unique position with regard to protecting the autonomy of the universities and saving them from undue political interference. The governor is, thus, intended to be a neutral entity, acting as a check on the power of the state and ensuring that areas such as courts and universities remain sufficiently removed from the influence of the Union government’s agenda or that of the state government.

A governor is not meant to enter into politics. The day-to-day role is often ceremonial and restricted to being the chief guest at functions, to giving inspiring speeches to students, to establishing whether a majority exists in the assembly for a proposed chief minister and to then formally inviting the said person to form the government. Following this, the governor has no political role.

There have been anomalies, of course, where governors have overstepped their remit. The Congress has done this numerous times, so also the Janata Dal. Some say it is impossible for a governor to remain far removed from the centre. Sibranjan Chatterjee in his article on the role of the governor published in the Indian Journal of Political Science, does a detailed analysis of governors.

Apparently, in 1970, following withdrawal of the support of the Jana Congress from the Swatantra-led coalition government in Orissa, the chief minister, RN Singh,  resigned—and instead of accepting his suggestion of dissolving the House, the governor took over the reins of the state government for a brief period. This was unprecedented. More recently, we have observed how governors were used to impose President’s Rule in Arunachal Pradesh and Uttarakhand under JP Rajkhowa and KK Paul, respectively. And how in November 2019, Maharashtra Governor Bhagat Singh Koshyari imposed and then lifted President’s Rule abruptly to invite a minority BJP government to be formed. This failed when it turned out that the Congress-NCP-Shiv Sena alliance had the clear majority.

A governor is in a truly unique position—he/she is not an elected person for a reason and is meant to maintain a dignified neutrality. This is not an easy role as it requires the governor putting his post on the line—he runs the risk of being sacked or moved to another state. Very few governors actually get to complete their terms, according to the Sarkaria Commission report of 1983 (under the Chairmanship of Justice RS Sarkaria with B Sivaraman and Dr SR Sen).

The report recommended several changes in the appointment of a governor: that he should be an eminent person; from outside the state, who must not have participated in active politics at least for some time before his appointment; he should be a detached person and not too intimately connected with the local politics of the state; he should be appointed in consultation with the chief minister of the state, vice-president of India and the speaker of the Lok Sabha.

More importantly, his tenure of office must be guaranteed and should not be disturbed except for extremely compelling reasons and if any action is to be taken against him, he must be given a reasonable opportunity for showing cause against the grounds on which he is sought to be removed. In case of such termination or resignation of the governor, the government should lay before both the Houses of Parliament a statement explaining the circumstances leading to such removal or resignation, as the case may be. Finally, after demitting office, a governor should not be eligible for any other appointment or office of profit under the Union government or a state one except for a second term as governor or election as vice-president or president of India, as the case may be. At the end of his tenure, reasonable post-retirement benefits should be provided.

The Commission felt that the state government should be given prominence in appointing the governor. The appointment should be made from a panel to be prepared by the state legislature and the chief minister should be consulted as there has to be a personal rapport.

The general practice, however, seems to be that the Union government merely informs the chief minister that a certain person is being appointed as the governor of the state. Some of the recommendations have been adopted, including the governor being from outside the state. The Supreme Court has many times emphasised the urgent need for implementing the Sarkaria Commission’s recommendations on selection and appointment of governors.

There are some offices which are meant to be completely neutral: governor, president, the judiciary. If these crucial entities merely follow the will of the centre, then we have no separation of powers anymore.

In the case of Kerala Governor Arif Mohammed Khan, he displayed repeated and fervent support for the government policy of CAA. However, the Kerala state legislature has rejected the CAA, National Register of Citizens, National Population Register and detention centres as blatantly divisive and anti-constitutional. Far from being in step with the state government law, Khan was eagerly pandering to the central government in a public forum. It is disappointing when people in such important constitutional roles do not manage to maintain their neutrality.

It is the governor’s role and sacred duty to defend the Constitution. Article 19(1)(a) confers the right to freedom of speech and expression. India is also a secular democracy—something that desperately needs defending. Khan defended neither. The perception should never be that the governor’s office is being used to further the interests of the ruling party. Perhaps the time has come to implement the recommendations of the Sarkaria Commission—but who will be bold enough to suggest it?

— The writer is Barrister-at-Law, Honourable Society of Lincoln’s Inn, UK, and a leading advocate in Chennai. With inputs from Tarun M