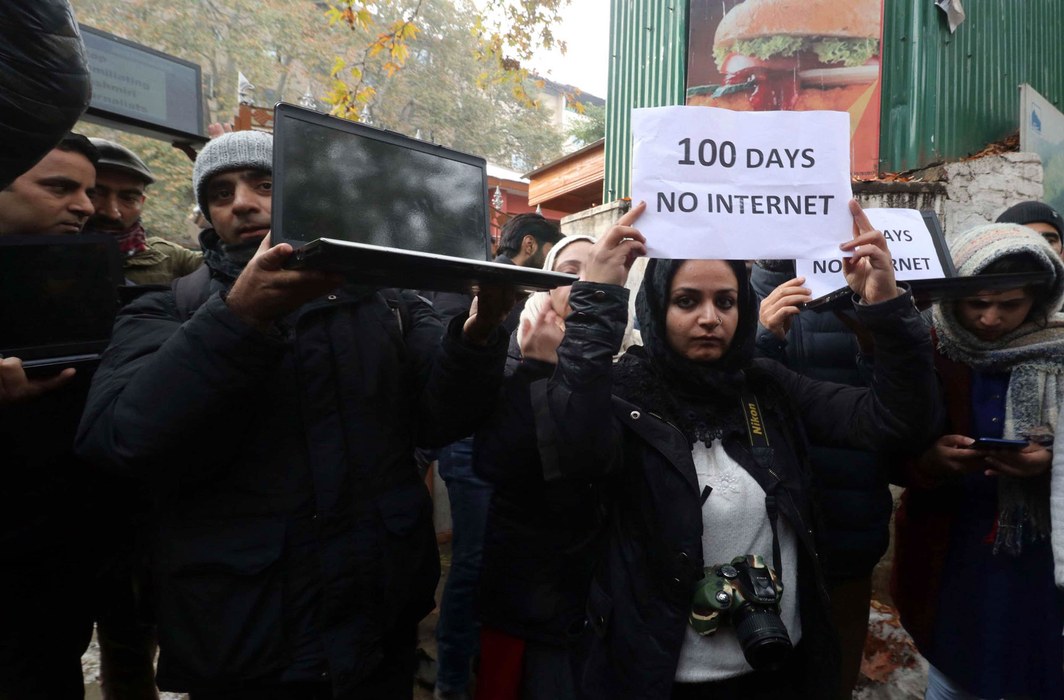 Never were constitutionalism and judicial duties articulated more accurately than in the case dealing with the internet shutdown issue. One hopes that the judicial voice is heard by all organs of the State and representatives of the people

On the eve of the 70th centenary of the Republic Day, the apex court, speaking through Justices NV Ramana, R Subhash Reddy and BR Gavai, has again revived faith in the constitutional ideals of liberty and dignity. In Anuradha Bhasin (January 10, 2020), the Court describes J&K as a “land of inherent contradiction” torn between violence and “incredible beauty”. But it makes no judgements on “political propriety” of parliamentary law but carefully delineates its jural scope. And the tasks of doing justice although no less difficult than the political, is stated as that of balancing “security and liberty concerns so that the right to life is secured and enjoyed in the best possible manner”.

The Court did not invalidate the present orders under Section 144 CrPC and internet shutdown but laid down some criteria of validity for these. Critics may be right to express constitutional anxiety because experience shows that the negotiation of judicial labyrinth is very time-consuming in a citizen’s struggle to ensure constitutionality in State action. Even so, one hopes that the very enunciation of norms and standards will have a positive democratising effect. And we all must still await the final decision on the matter of constitutionality of the repeal of Article 370, yet to be heard by the Court.

That said, the self-discipline of the Court is worthy of applause. It affirms that constitutional adjudication requires a reasoned elaboration and a justifiable judicial discourse, in the arena of violation of basic human rights. Of course, as I demonstrated long ago (in my book Supreme Court and Politics) constitutional politics—the politics of interpretation—is different from competitive power politics because the latter is self-interested reason while the former is disinterested in the outcomes. Another way is to say that what we have in constitutional adjudicative politics is the conflict of values rather than conflict of rival interests.

The presumption of constitutionality of legislative action will remain in place based on the premise that the political class, in making and enforcing the law, respects the basic rights guaranteed in part 111 of the Constitution, including new rights—standards that emerge as necessary emanations from the doctrine of the basic structure and essential features of the Constitution. While the Court categorically says that it is not our “forte to answer whether it is better to be free than secure or be secure rather than free”, it will always respond to “ensure that citizens are provided all the rights and liberty to the highest extent in a given situation while ensuring security at the same time”.

Upon hearing the vigorous contentions advanced by the State (through attorney general and the additional solicitor general) and by Vrinda Grover, Kapil Sibal, Dushyant Dave, Sanjay Hegde and other distinguished lawyers for the petitioners and interveners, the Court framed five issues. First, whether the “Government can claim exemption from producing all the orders passed under Section 144, CrPC, and other orders under the Suspension Rules?” Second, whether the freedom of speech and expression and freedom to practise any profession or to carry on any occupation, trade or business over the internet is a part of the fundamental rights under Part III of the Constitution. Third, whether the government’s action of prohibiting internet access is valid. Fourth, whether the imposition of restrictions under Section 144, CrPC was valid. And fifth whether freedom of press was “violated due to the restrictions”.

In a far-reaching ruling on the first issue, the Court decided that the State must produce all orders under Section 144 of the CrPC, together with a statement of objective grounds, because a “democracy, which is sworn to transparency and accountability, necessarily mandates the production of orders as it is the right of an individual to know” and the State “has to act in a responsible manner to uphold Part III of the Consti­tution” and not “take away these rights in an implied fashion or in casual and cavalier manner”. 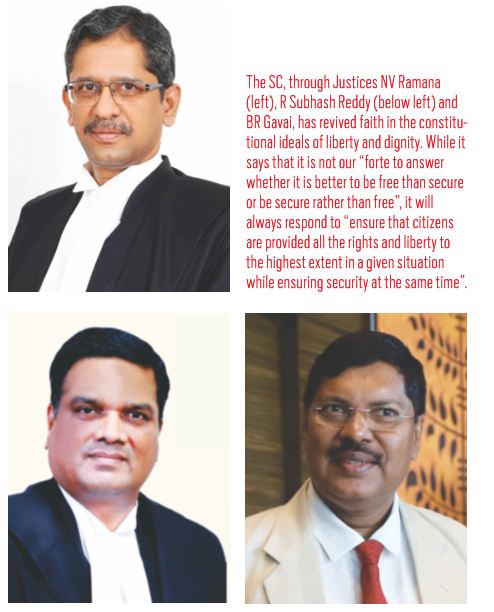 As if this was not strong enough, the Court goes further to state that this normative constitutional expectation is also “a requirement under natural law, that no law should be passed in a clandestine manner”. These are strong words given the fact that the judicial doctrine of constitutional expectations is in its infancy. Besides, the recent judicial tendency, on a high growth curve, to rely on natural law should be tempered with the recall that it has acted historically as an agent of emancipation as well as of repression.

The difficulties of invoking the principles of natural law are soon manifest in the adroit judicial handling of the second issue. While agreeing with the view that internet access is a “tool” of the right to freedom of expression and the right to freedom of trade and business, the Court clearly rules (in paragraph 28) that as it has not been specifically argued by any counsel that “the right to access the internet” be declared as a“fundamental right…we are not expressing any view on the same”. In other words, internet access is not a fundamental human right, it may be protected merely as an aspect of Article 19 rights. The media and informed public opinion, however, have perpetuated the view that the right to access to internet is a fundamental and natural right! Surely, natural rights may not depend on what counsel chose to argue! Why did the Court stop short of a normative declaration of the right to internet access?

The power of imposing reasonable restriction is well analysed under the newly fangled doctrine of proportionality. Even the relatively uninitiated may well appreciate the facts that the power to “restrict” does not include the power to altogether abrogate the right and the State should make the showing that out of a range of alternatives, measures least restrictive to the rights declared by the Constitution have been adopted. But, of course, the Court chooses to reiterate and refine the “proportionality” test as signifying that:

“A law interfering with fundamental rights must be in pursuance of a legitimate State aim… The justification for rights-infringing measures that interfere with or limit the exercise of fundamental rights and liberties must be based on the existence of a rational connection between those measures, the situation in fact and the object sought to be achieved.… The measures must be necessary to achieve the object and must not infringe rights to an extent greater than is necessary to fulfil the aim.… Restrictions must not only serve legitimate purposes; they must also be necessary to protect them” and “the State must provide sufficient safeguards relating to the storing and protection of centrally stored data.”

The orders passed under Section 144 of the CrPC fail to meet this test, and rendering the right to constitutional remedies infructuous by non-disclosure of reasonable grounds based on a full “application of mind” and stating objective reasons which citizens may contest. The Court has done a great service in saying that collective security is not best served by rank arbitrariness of blanket orders.

Very much the same reasoning extends to the last issue, which is discussed largely in terms of the “chilling effects” on freedom of the press. Importantly, the Court enunciated the test of “comparative harm”, under which the judiciary is “required to see whether the impugned restrictions, due to their broad-based nature, have had a restrictive effect on similarly placed individuals during the period”. May be, the instant petitioner failed to prove such harm as other newspapers were not disabled and the ban on her newspaper itself was not long-lasting. But subjective dimensions of the experience of the “chilling effect” should not have been so readily dismissed.

The judicial discourse in this case has to be read in the light of the wise words uttered in Lt Governor, Delhi (2018) where (speaking through Dipak Misra, CJI), the apex court enunciated a doctrine of “constitutional trust”. The Court said that the “representative form of government should not become a government by elites where the representatives so elected do nothing to give effect to the will of the sovereign. The elected representatives must not have an ulterior motive for representing their constituents and they should not misuse the popular mandate awarded to them by covertly transforming it into ‘own rule’. The inherent value of public accountability can never be brushed aside.”

Never were Indian constitutionalism and judicial duties articulated so accurately and acutely and one hopes that the judicial voice is heard by all organs of the State and the representatives of people.

Lead pic: The SC agreed that internet access is a “tool” of the right to freedom of expression/Photo: UNI