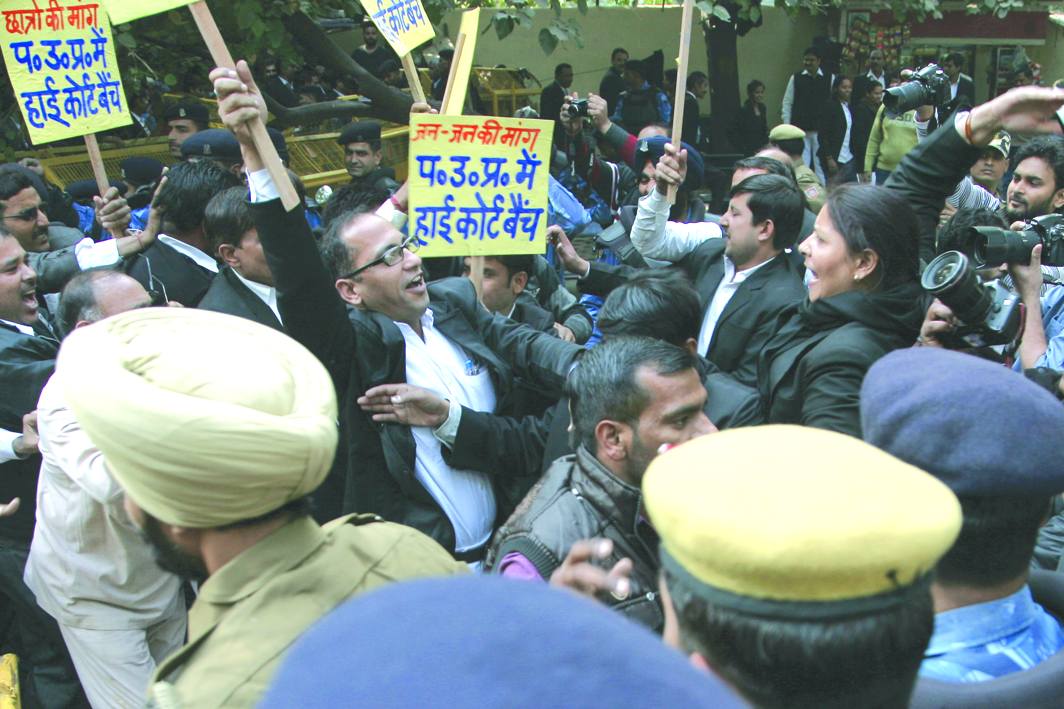 Though the demand for more High Court benches often turns into an emotional and political issue, there is no law restricting more from coming up

The Supreme Court, in many decisions, has upheld a basic human right of access to judicial remedies. The Constitution was itself amended by the insertion of a new Directive Principle of State Policy (Article 39-A) which prescribes that the “State shall secure that the operation of legal system promotes justice based on equal opportunity” and that “opportunities for securing justice are not denied to any citizen by economic or other disabilities”. The revision also contained the provision of legal aid which has been enacted. However, this 1976 amendment has not addressed “economic” and “other disabilities”. Surely, the denial of access to justice is a major constitutional disability, which legal aid and services may only partly alleviate.

The Supreme Court in 2012 [Brij Mohan Lal v. Union of India] further affirmed that “it is the constitutional duty of the Government to provide the citizens of the country with such judicial infrastructure and means of access to Justice” so that “every person is able to receive an expeditious, inexpensive, and fair trial”.

No doubt, that decision related to judicial appointments in fast track courts, but the Court explicitly negatives the argument that “financial limitations or constraints” may restrict this constitutional and “basic fundamental human rights”. Most crucial is the accentuation of the “judicial infrastructure” and “means of access to justice”, raising two related questions: Do “access to justice” rights then include a right to decentralisation of judicial administration? If not, does the existing policy for High Court benches violate any adjudicatory policy regarding access to judicial infrastructure? My opinion in both cases is a resounding yes.

Access to justice is now accepted as a virtue of lawyering and justicing, but disagreement persists about the geography of access among litigants, lawyers, and justices and prevents action. The location of benches often turns into an emotional, and political, issue and furnishes an alibi for adjudicative and political inaction. Surely, location decisions can prove irksome as may be seen in two instances.

Justice Jaswant Singh, in his landmark report in the eighties, was able to depict how lawyers in Uttar Pradesh were bitterly divided over where to locate the High Court Circuit Bench in the western region, but decided that it should be in Agra. Certain sections of the Bar in western Uttar Pradesh still take recourse to a symbolic strike today over the non-creation of a bench in that region. In Odisha, while most District Bar Associations favoured Sambalpur as the site of the western bench, some lawyers protested at the exclusion of Balangir, Rourkela, and Bhawanipatna and engage in a symbolic strike ever so often. A stalemate still continues.

The simple procedure for decision in this regard was clarified by the Union law minster in a written reply in the Lok Sabha on April 28, 2016. Any decision must first obtain the consent of the chief justice, then the governor of the state, then, a “complete proposal from the State Government” is to “provide infrastructure and meet the expenditure” so that the matter is finally placed for the consent of the central government.

But this procedure betrays no transparency. There may be operative norms for the Judiciary and the Executive, but these remain beyond public knowledge and scrutiny. There is no requirement that the state or the centre must appoint a commission and the commission’s report ought to be seriously considered and that the reasons for not accepting the recommendations should be made public. Nowhere does this procedure contemplate the formal engagement of the Indian and State Bar Council or associations of lawyers, including the organised associations of the Bar in the concerned state.

The Justice Jaswant Singh Commission said that the constitutional position under Article 214, providing that there shall be a High Court for each state does not debar the creation of new benches of High Courts. Section 51(2) of the State Reorganization Act, 1956, says further that permanent benches may be created by a presidential order after consultation with the chief justice and the governor of the new state. In either case, there is no explicit bar on the creation of new permanent benches as this does not violate the constitutional requirement of a single High Court for each state.

Indeed, the Report begins with an unattributed quote: “A legal system that works to serve the community is better than the academic conceptions of a bevy of Platonic guardians unresponsive to public needs.” This prefatory quote can be read in many ways (for example, as a general argument against platonic philosopher-kings) but perhaps is best read in terms of public convenience, ie, the convenience of the litigating public and grassroots lawyers.

This argument also brings in the judicial process. Here, removal of “congestion” of cases in High Courts is offered as one of the principal reasons. The Commission made a similar argument in recommending an additional bench in Agra. But would this lead to decongestion or more congestion? Unfortunately, proposals for or against the creation of benches are generally devoid of mathematical models of optimal-run litigation or filing behaviour.

The convenience argument often considers distance as an enemy of justice, whereas proximity and localisation are favoured. Justice closer home rather than far removed to state capitals is preferred. Often, the usual complaint is of high expenditure and some sharp practices at the Bar. This indicates that there should be reform of legal professions, a difficult and parlous enterprise.

The linkage between proximity and justice is intuitively appealing and very often urged, even agitated for. Whether this will lead to a justification for more benches is a question that needs to be raised and studied in depth. It is here that questions about overall efficiency may arise for those regions denied judicial decentralisation.

Law reformers and justices themselves are not unanimous in their views about additional benches. The Law Commission of India expressed itself twice against it (in the 4th and 14th reports), though it later reversed its stance (in the18th report). However, the arguments of the learned justices may well be classified in terms of judicial integrity, tradition and proliferation.

The argument of judicial integrity assumes many forms.  Some have to be stated only to expose their hollowness. For example, there is the argument that chief justices’ authority may be weakened or that there would be lack of “cohesion” and widespread “fragmentation”. These syndromes occur also where there are no benches within the state; and the outcries of fragmentation presume that it is necessarily a bad thing in itself, despite Article 39-A and the apex court’s own decisions! There is further no evidence that the High Court’s authority will be weakened.

The arguments based on “tradition” have initially more persuasion. No doubt a High Court at a central place acquires more tradition than the many constituted benches and these struggle to develop a tradition of their own.

However, this argument should not overlook the fact that traditions develop with time and care.

The arguments against proliferation deserve serious attention, not a knee-jerk response. No doubt, advocates that link proximity with justice do, and will, argue that decentralisation of justice institutions is a public good and a social virtue. Cogent ways must be devised to meet this argument. Perhaps, the day will never come when there is a High Court bench for each district in a state. But this is no argument against the creation of some benches in larger states.

High volatility among lawyers and sometimes the populace may be a relatively novel phenomenon for the judiciary, but it is not for governance institutions or the Executive-Legislature combine. Governance is, in one sense, the effective management of public dissent. Cross-sectional volatility is, to put it another way, the very stuff of democratic politics.

Indeed, there is no ground for saying and doing nothing by the paramount institutions of governance. Deep sensitivity to justified demands is also one way of governance. The history of postures towards demands for decentralisation of justice institutions is one replete with indifference, non-consultation and non-decision.

The way ahead ought to be different and more participative. Ad hoc approaches ought to yield to a clear enunciation of access to the administration of justice. The CJI and High Court chief justices may, in the first place, articulate the criteria for formation of benches which will be discussed with the Bar and other affected interests. After that, the Executive and Legislature should enunciate a clear national policy of access to justice and judicial infrastructure. The idea that there should be peripatetic circuit justices may also be explored as an alternative to permanent benches.

Access to courts is too vital a constitutional affair to be left to the whims and fancies of lawyers and justices, the Executive and the Legislature.

The time has come after six decades of the Constitution to have a more workable and sensible national policy rather than ad hocism and deafening silence on actual demands for access to justice.

—The author is an international law scholar, an acclaimed teacher and a well-known writer and he draws on some materials from his first Sailabala Pujari memorial lecture at the NLUO, Cuttack. Sailabala was the first woman lawyer in western Odisha and led the long movement for the bench at Sambalpur