Even as a special CBI court on May 30 granted bail to BJP leaders LK Advani, Murli Manohar Joshi and Uma Bharti in connection with the Babri Masjid demolition case and refused to drop charges against them and three others, there have been calls from saner voices to settle this dispute.

The Supreme Court had earlier this year said that the Ayodhya dispute must be settled amicably through “a cordial meeting” of all parties, with Chief Justice JS Khehar even offering his personal mediation. This was the right move to turn the mandir-masjid deadlock into a dialogue. For once, there is hope among both communities that a solution is within sight in the centuries-old impasse. There is no denying that Lord Ram and the Ramayan are central to India’s social history and civilisation. Notice that Ram comes in the word Ramzan and Ali in the word Diwali. A common meeting ground between both religious communities is the only way forward now.

According to Dr Khwaja Iftikhar Ahmad, chairman, Inter Faith Harmony Foundation of India, Ayodhya is a holy city. For people of other faiths, its sanctity is a subject of respect and reverence, whereas for Hindus, it is both sacred and holy. However, the dispute does not stem from the holy nature of the city or the birth of Lord Ram. It relates to the existence of the Babri Masjid and the title suit.

Ahmad said that keeping in mind the volatile nature of the issue where the masjid was razed to the ground on December 6, 1992 by kar sewaks, the increasing gulf between both communities and the fear of these recurring in future, it was imperative to find an amicable solution to the contentious issue. While the matter is in court, there have been voices of sanity as against politically motivated elements.

SN Pathan, ex-Vice Chancellor, University of Nagpur, feels it would be best for Indian Muslims to gracefully offer the patch of land in Ayodhya for a Ram Mandir rather than be exploited by vested elements. This must be reciprocated by the Sangh Parivar who can get an elegant masjid complex made in the same land at a distance from the temple. Let this complex be called Ram-Babri Interfaith Harmony Compound, he suggested.

As creator of the World Peace Center at Alandi, Pune, which was established in December 1996, Karad also filed a petition in the Supreme Court that if permitted, he would establish the Vishwadharmi Shri Ram Manavata Bhavan along with places of worship of all religions on the 60-acre land in Ayodhya, including the 2.7-acre disputed site. In his petition, Karad said: “We firmly believe that this Vishwadharmi Shri Ram Manavata Bhavan will not only help to minimise the tension, hatred, jealousy and suspicion, particularly between the Hindus and Muslims, but will also create an atmosphere of understanding, mutual trust, confidence and universal brotherhood amongst all the communities going beyond caste, creed, religion and boundaries of nations.”

However, despite these voices of peace and sanity, the mood among Hindu and Muslim political affiliations is not all that conciliatory. When this writer met RSS leader Dattatreya Hosabale and informed him of the idea of a joint mandir-masjid complex, he said it was utopian and impracticable. Even Ajit Doval, the National Security Advisor, had reservations due to the unpredictable behavior of fringe elements on both sides who would not allow such a move to go forward.

In 1991 and again in 2003, Prayag Peeth Shankaracharya Swami Madhawananda Saraswati had agreed to the building of a temple and a mosque within the area in question in Ayodhya. Had this suggestion been heeded, the country could have been spared much strife and bloodbath and the long drawn-out court case. Of course, political parties would rather have this issue simmer for a long time for their vote banks. 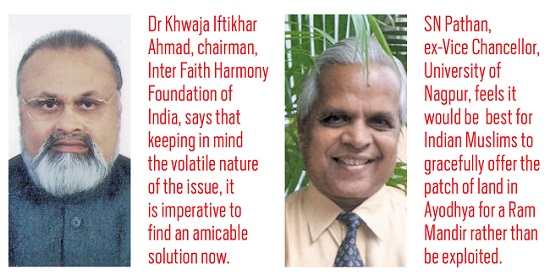 Among Muslims too, many leaders are interlocutors or brokers who acquire state patronage for themselves and their coteries. Their obscurantism is leading the community backwards and their narrow outlook is out of tune with reality. Muslims in India suffer from poor education, religious orthodoxy and socio-economic backwardness, but it has few leaders who will address these real problems.In 1991 and again in 2003, Prayag Peeth Shankaracharya Swami Madhawananda Saraswati had agreed to the building of a temple and a mosque within the area in question in Ayodhya. Had this suggestion been heeded, the country could have been spared much strife and bloodbath and the long drawn-out court case. Of course, political parties would rather have this issue simmer for a long time for their vote banks.

Today, the Muslim community really needs a new leadership imbued with vision, courage and perspective. It needs leaders in the mould of Maulana Azad, APJ Abdul Kalam, Rafi Ahmed Kidwai, Dr Zakir Hussain and Saifuddin Kitchlew,  to name a few. These men believed that minorities have as much responsibility in a secular democracy as the majority. Their vision led to Muslims being called not a minority, but India’s second majority.

Lessons could also be learnt from other communities. More than a decade back, the Sikh community in Punjab offered to return an occupied mosque to Muslims. This mosque, known as “Guru ki Maseet” (Guru’s Mosque), was being used as a gurdwara by the Sikh community and was situated in Gurdaspur district. Another example was in Maler-kotla, Punjab where local Muslims restored a church in the aftermath of the Quran burning call. Such acts create a feeling of fraternity among communities. Surely, Muslims too are capable of such a magnanimous gesture. They should desist from agitating for non-issues and concentrate on two major problems—educational backwardness and economic deprivation. This would not only help remove prejudice and tension between the two communities but create a proper environment for meaningful and lasting understanding.

—The author is a commentator on cultural, political and social
issues and is the grandnephew of Maulana Abul Kalam Azad