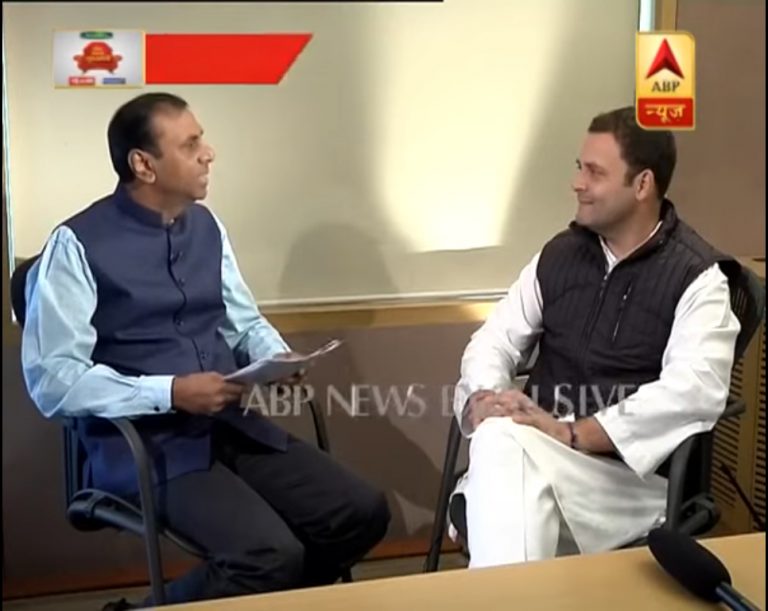 Above: The EC had sent Rahul Gandhi a notice after he gave an interview a day prior to the final phase of voting in Gujarat in December 2017

As the nation gears up for the 2019 general election, the Election Commission (EC) has sprung into action by recommending a slew of reforms for ensuring free, fair and transparent polls.

The EC’s move comes in the wake of a report by a 14-member panel constituted in December 2018 to recommend changes to Section 126 of the Represen­tation of the People Act (RP Act), 1951, and the Model Code of Conduct (MCC) in the light of the burgeoning use of digital platforms for outreach by political parties. This is also referred to as the “silence period” or “election silence”.

The row arose when a notice was issued to the Congress president for giving interviews to news channels on December 13, 2017, a day before the second and final phase of voting in Gujarat. The notice was later withdrawn after the Congress questioned why no action was taken against the BJP president and a Union minister who had also given conferences on the same day.

Further, the EC announced that “the Commission is of the considered view that due to multifold expansion of digital and electronic media, the extant Model Code of Conduct, Section 126 of the RP Act, 1951, and other related provisions require revisiting to cater to the requirement and challenges of the present and emerging situations”. All stakeholders such as social media representatives, political parties and the Internet and Mobile Association of India were consulted by the panel, and the report is now under consideration.

Some noteworthy recommendations of the panel include amendment to Section 126 of the RP Act to ensure that all manifestos are released at least 72 hours in advance of polling. It has repeatedly been observed that some political parties release their manifesto during the “silence period”. Although within the letter of the law, this practice is ethically questionable.

The panel also recommended strict adherence to News Broadcasting Standards Authority (NBSA) guidelines by private news channels and maintenance of a record of expenditure incurred in all outreach activities by political parties on digital platforms. The panel also highlighted the urgent need for drafting a separate code of ethics for election coverage in the age of electronic and social media. Such a code can then be enforced by a committee comprising of a senior EC official along with representatives from the Information and Broadcasting Ministry and various sections of the media and concerned regulatory bodies. The EC made it clear that the panel recommendations are a move aimed at “minimizing the possible interference of activities which aim at indirectly influencing voters during the valuable silence period of 48 hours provided to them”.

The media has historically been an indispensable ally of the EC in ensuring accountability of politicians and exposing the faults within the system. A free press is only second-most important to free elections in India. With great power comes great responsibility.

Unfortunately, the Indian media is only “partly free”, according to the World Freedom Index, 2018. India ranks an abysmal 138 out of 180 countries, two ranks below last year. Sensationalisation of news for commercial interests is on the rise. The NBSA guidelines are often breached by TV news channels and the threat of paid and fake news threatens to undermine democratic outcomes at the ballot.

Issues related to opinion and exit polls are also a matter of serious debate. Most are unscientifically conducted, possibly sponsored and are illegal under the law of the land. Section 126 of the RP Act, 1951, was amended in 2008 to disallow exit polls till the end of the last phase of polling. It is surprising that the EC allows it at all in the end. Opinion polls and surveys, on the other hand, are allowed, except in the 48-hour silence period of each phase.

“Election silence” should logically be extended to digital platforms and social media as well. Social media should flag political advertisements and other political content and collaborate with the EC to ensure that they are taken down as soon as possible.

“New Media”, i.e., social media and online media, has seen a phenomenal rise in following. There are approximately 260 million social media users in India today, up from 168 million in 2016. According to Statistical Data Portal, Facebook alone will have 320 million projected users by 2021.

Any political party with a robust social media presence can hope to swing 3-4 percent of the votes, especially of the youth. As a result, data analytics wings of political parties are leaving no stone unturned to customise the outreach for maximum influence.

The EC has long realised the potential of media portals, especially Facebook, in improving voter turnout, and has collaborated with them for issuing alerts, spreading awareness and registering young voters. Former CEC OP Rawat had rightly remarked: “When technology evolves and such issues (harvesting of voters’ data by political parties) come out, we try to find solutions to check the misuse, while at the same time harnessing its utility.”

It is in order to find solutions to indirect voter manipulation online that recommendations by the Umesh Sinha panel shall serve as guidelines. These will help in any future legislation on the issue, action by the EC and also contribute to a wider debate among civil society regarding threats to electoral democracy in the age of social media and commercially driven political coverage.

The courts have repeatedly iterated that free and fair elections are the core of democracy (Mohinder Gill vs CEC, 1977; PUCL vs UoI, 2003; UoI vs ADR, 2013). It is imperative for the EC to ensure that voters don’t fall prey to the cons of social media and that political parties don’t do anything to disrupt “election silence” and violate the Model Code of Conduct. Any form of political messaging should be factual and ethical and should not contain hate speech. It should not have any illegal content and should strictly adhere to the Model Code of Conduct.

Ethical conduct has to trump the instinct of cashing-in on poll fever. All sections of the media should desist from treating the political arena as any other market. The rules applying to traditional media should apply to social media as well and should be followed by both.

The three Ms—Money, Media and Mafia—should not be allowed to threaten meaningful democracy.