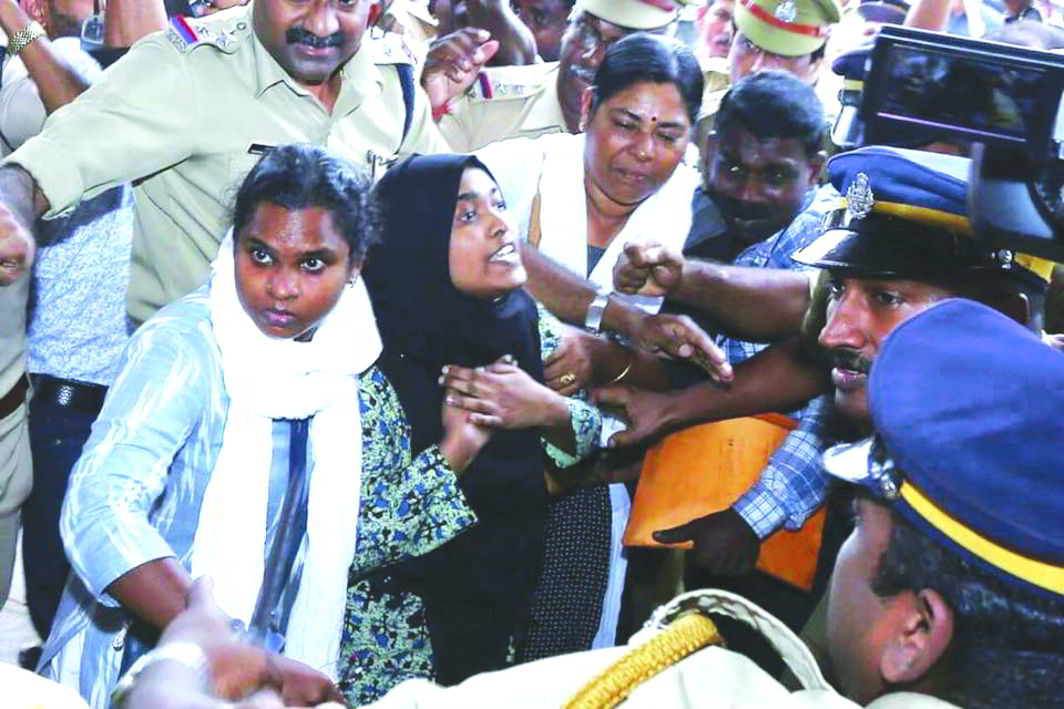 Above: Hadiya said she converted willingly but past cases raise questions of national security

As more and more cases emerge from God’s Own Country of girls converting to Islam, the state’s and the Supreme Court’s views on the issue are at divergence

The “love jihad” case of Hadiya still hangs in the balance with the Supreme Court yet to decide on whether her marriage to Shafin Jahan stands or not. The judiciary seems to be divided between the individual right of the girl and questions of national security that the case has thrown up.

However, Hadiya’s conversion case is not an isolated incident in Kerala. The National Investigation Agency’s claim that there are close to 11 such cases currently under investigation needs to be viewed with seriousness. Along with Hadiya’s case is that of Bindhu Sampath’s, a mother from Thiruvananthapuram, who was impleaded in the same Shafin Jahan versus Asokan (Hadiya’s father) & Others case in the apex court.

Ironically, on the day that the Left government in Kerala was filing its response in the apex court, claiming that its police had done a thorough investigation and that an NIA probe was unwarranted, Sampath had filed an affidavit asking the Court to involve the NIA to investigate all cases of forced conversion and marriage in Kerala.

Sampath had reason to do this. In 2016, her only daughter, Nimisha, a Hindu girl, had reportedly left for Afghanistan to fight for the Islamic State along with her husband, Issa, who was a Christian converted to Islam. For the past year, the whereabouts of Nimisha, who had taken a new name, Fathima, were unknown. Nimisha was pregnant when she left the country in June 2016. Her mother learnt about it from a WhatsApp message she sent to her while travelling. 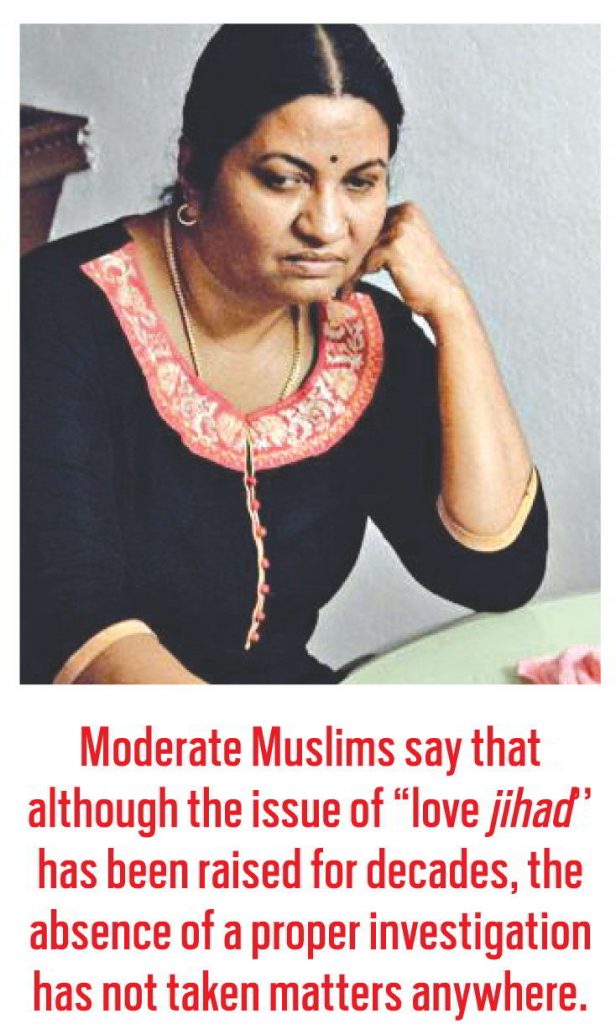 “This is a well set-up network that is operating in Kerala where unsuspecting girls like my daughter are being brainwashed and converted. You need a thorough investigation. I had tried approaching everyone possible for this. But I did not get any positive reply. Now my only hope is the Supreme Court,’’ laments Sampath.

In her petition, Sampath alleged that it was the SDPI and the Popular Front of India (PFI), two frontline Muslim organisations in the state well-known for their separatist ideology, that are behind the entire network. This is a claim that Hadiya’s father, Asokan, too had put forth as Shafin Jahan is an active member of PFI. The PFI is alleged to have evolved from the banned Students Islamic Movement of India (SIMI) which is accused in a number of terror and bomb blast cases across the country.

There is a glaring similarity in the way in which Nimisha and other girls, including Akhila (Hadiya), got converted to Islam. Both Nimisha and Hadiya were studying in college when, through their hostel mates, they came in contact with Salafi Islamic Centres where they were told that Islam was a better religion than theirs.

In the case of Nimisha, it was her proximity to one Sajjad Rahman in Thiruvananthapuram that took her to the Salafi Centre in the city where she converted on the promise of marriage by Rahman. Sampath claims that in a few months’ time, Rahman severed all ties with Nimisha, leaving her in the lurch.

“If it was out of genuine love for my daughter, even I would not have minded her adopting any faith. But this was clearly a plan to convert her. And, now we realise that the gameplan was to take her to an IS-controlled area,’’ added Sampath.

Nimisha, who had by then become Fathima, befriended Mariam, another converted girl who introduced her to Issa, who was Mariam’s brother-in-law. The brothers and their families were among the 22 who left India to fight for the IS in Afghanistan and Syria. If reports are to be believed, Mariam’s husband and Issa’s brother, Yahya, was killed in an American drone attack on the IS-held territory in Afghanistan a few months ago.

Sampath in her lengthy impleading document clearly outlines how certain organisations’ members could be seen outside both the police station and the High Court while she was fighting the case for her daughter. When the High Court in December 2015 left her daughter to her will after hearing the habeas corpus petition, Sampath alleges that this same group took her with them from outside the court premises.

While Hadiya and Nimisha are two cases that are caught in the judicial tangle, there are others in Kerala who have managed to wriggle out and openly describe their ordeal. One such person is 23-year-old Athira Nambiar from Kochi, who in a press meet spilled the beans on the modus operandi for conversions in the state.

She told the media that it was PFI activist Siraj who befriended her. He, along with a few female classmates of hers, had been continuously telling her about the “good side” of Islam as opposed to Hinduism’s idol worship and polytheism, which appealed to her.

Nambiar claims: “Siraj was the one who motivated me to leave home and get converted. Later on, I stayed at his relative’s house. He, along with a few workers of the Popular Front, used to take me from one hideout to another before I went to the police. Even my mobile phone was taken away from me. It was given back to me only after I told the cops that I had converted of my own will and that I was staying with a classmate.”

Nambiar, however, returned to her parent religion after she decided to re-convert following her parents’ prolonged interaction with her after she chose to stay with them and practise Islam.

Moderate Muslims say that although the issue of “love jihad’’ has been raised in Kerala for more than two decades, the absence of a proper investigation has not taken the situation anywhere. Ashraf Kadakkal, a prominent educationist, said: “There is no evidence as such to suggest that there is a concerted effort on this front. But what is needed is a thorough investigation, especially when you have so many such cases coming out of professional colleges where peer pressure is said to play a vital role, which is then followed up by organisations like the Popular Front and SDPI.”

Subash Babu, a retired superintendent of police who investigated a number of terror cases, said that although for years love jihad has been operational in the state, the modus operandi has evolved only recently.

“Earlier, they used to support kids who wanted to willingly convert to Islam because they were in love with someone. Now they are actively engaging fellow women students to openly influence impressionable minds and take them down the path of conversion. Marriages and love happen after that,’’ said Babu.

Babu’s words find resonance in what Nambiar, Asokan and Sampath have told the Supreme Court. That Hadiya’s marriage to Jahan had no connection with her converting to Islam and that the marriage was done only to justify her conversion was one of the prime reasons the Kerala High Court annulled it. Sampath too says in her petition that Rahman left Nimisha soon after she converted and then someone else appeared in his place to justify her conversion.

This is one of the prime reasons the Kerala High Court felt that an NIA investigation is the need of the hour, a claim that has not found resonance in the Supreme Court.