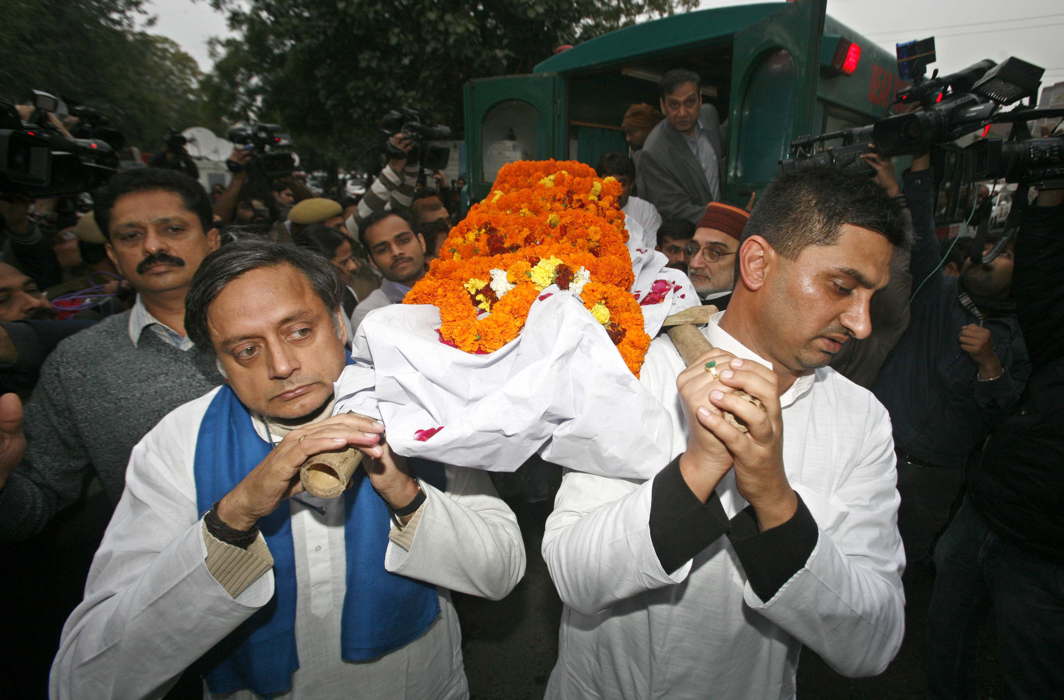 More than four years after Sunanda Pushkar was found dead in a suite in Hotel Leela Palace in Delhi’s tony Chanakyapuri area, the Delhi police last week filed a chargesheet for the offence of abetment of suicide and cruelty to one’s wife against Shashi Tharoor, the sitting member of parliament representing Thiruvan-anthapuram constituency in Kerala.

Tharoor was a minister in the UPA government led by Manmohan Singh when his wife was found dead on the night of January 17, 2014, in suite no. 345 of the hotel in suspicious circumstances. It is alleged that she consumed tablets without having a doctor’s prescription and that it was a case of an overdose of Alprazolam (Alprax tablets, a prescription drug given to those suffering from panic disorders, anxiety and tension due to stress.)

It is revealed from investigations carried out in the said suite that two 15-tablet strips were found near her body on which only three tablets remained in one strip. Along with unused Alprax, the police also found 18 caplets of Exedrine Ua drug (used to treat migraine) in a medicine box.

Though the initial examination of Pushkar revealed injury marks on her body (an alarming number of 15 ante mortem injuries, including a visible bite mark on the left hand), no FIR was registered till 2015. It may be recalled that the Congress party was in power at the centre until May 2014, when the BJP-led NDA unseated it.

It appears that Crime Number 4 of 2015 was registered as an FIR in the Sarojini Nagar Police Station in South Delhi for offences under Sections 302, 306, 498A of the Indian Penal Code, 1860. Simply put, these relate to murder, abetment of suicide and cruelty to wife. The chargesheet reveals that the 15 ante mortem injuries are indicative of scuffle marks and though they are simple in nature, caused by blunt force and are non-contributing in the death of Pushkar, yet, they assume relevance as now it appears and it is alleged that the scuffle marks were a result of scuffles between Pushkar and Tharoor.

A staffer in Tharoor’s office by the name of Narain Singh is supposed to have given a statement to the police that there were frequent scuffles between the couple. Pushkar and Tharoor had got married on August 22, 2010, and she died approximately three and a half years later, well within the seven years of her marriage to Tharoor.

The chargesheet alleges offences of cruelty which resulted in depression post harassment meted out to Pushkar by Tharoor, resulting in her committing suicide in the hotel suite. If the cruelty alleged by the prosecution is of such a nature that it would amount to being termed as wilful conduct likely to drive any normal woman to commit suicide or to cause grave injury or danger to health, whether mental or physical,  then the matter would fairly fall within the confines of the offence of cruelty punishable under Section 498A of the Indian Penal Code, 1860. For this, the scuffle marks need to be looked at very seriously.

As far as abetting the suicide is concerned, if within seven years of marriage a woman dies by committing suicide and the presence of cruelty as mentioned above exists, then under Section 113A of the Indian Evidence Act, the law raises a presumption of law where it is presumed, unless the converse is shown, that the suicide is as a result of abetment by the husband. For the purpose of establishing abetment of suicide in such cases involving husband and wife, there is no need for any further proof of actual goading, instigation or abetment. These kind of deaths occur within the four corners of a person’s house and hence this statutory presumption was incorporated in the Indian Evidence Act on December 26, 1983, particularly because prior to that, proof of abetment was seldom available and a number of acquittals took place because of the inability of the prosecution to prove actual abetment.

Shortly after the Delhi police filed the chargesheet on May 14, the former diplomat-cum-ex-minister termed the action “preposterous” and vowed to fight it “vigorously”. It will be interesting to see how Tharoor responds to the chargesheet and particularly the evidence gathered after the examination of the body of Pushkar in the hotel suite.

—The writer is an ace criminal lawyer based in Mumbai. This write-up is based entirely on information gathered from the print and electronic media without having read the chargesheet filed by the Delhi police which runs into 3,000 pages. The purpose of the column is to educate the public about the laws of the country with respect to such suicide deaths. It has been written in good faith and for public good without hearing the side of Shashi Tharoor and purely based upon material published/aired in various media