With most economic indicators on a downturn, the government needs to kick in a set of reforms that would signal that it is serious about economic growth, thereby changing spending and investment behavior

The Indian economy is going through a sharp slowdown. Most major economic indicators are at record lows. Unemployment is at a 45-year high, business investment at a 13-year low, corporate profits to GDP at a 15-year low, capacity utilisation at a 10-year low, agricultural growth at a 16-year low, household savings at a 20-year low, GDP at a 5-year low, and significant sectors like automotive and real estate face historic declines in sales volume.

To pretend that this is just a cyclical or temporary downturn is living in a fool’s paradise. In a previous article titled “India’s lost decade” (https://contractwithindia.com/indias-wasted-decade/), I documented a decline in most major economic indicators starting around 2010-11, and worsening in the last five years. These issues cannot be fixed with just monetary policy (RBI lowering rates) or fiscal policy (reducing marginal tax rates). They require smart and well-thought-out structural reforms. The 1991 liberalisation reforms served the country well and moved 440 million people out of poverty, but they have run their course, and it is time for a new round of bold reforms.

The Modi government can turn on the animal spirits of investment and spending and revive the economy by announcing a set of reforms outlined below. These reforms will not get implemented overnight, but by signalling its understanding of the problem and its intent to implement a new generation of structural reforms, the government can bring about a behavioural change and replace fear with optimism and change both spending and investment behaviour and help revive the economy.

A growing economy needs money. As individuals consume more, they need more money to conduct transactions. There is clear evidence of a significant drop in liquidity and credit in the economy over the past decade. This has affected both consumer spending and business activity. A measure of the amount of money supply in the economy is “broad money” and includes currency in circulation plus current account and savings deposits in commercial banks. The graph shows a continual decline in the annual growth in money supply over the last decade. 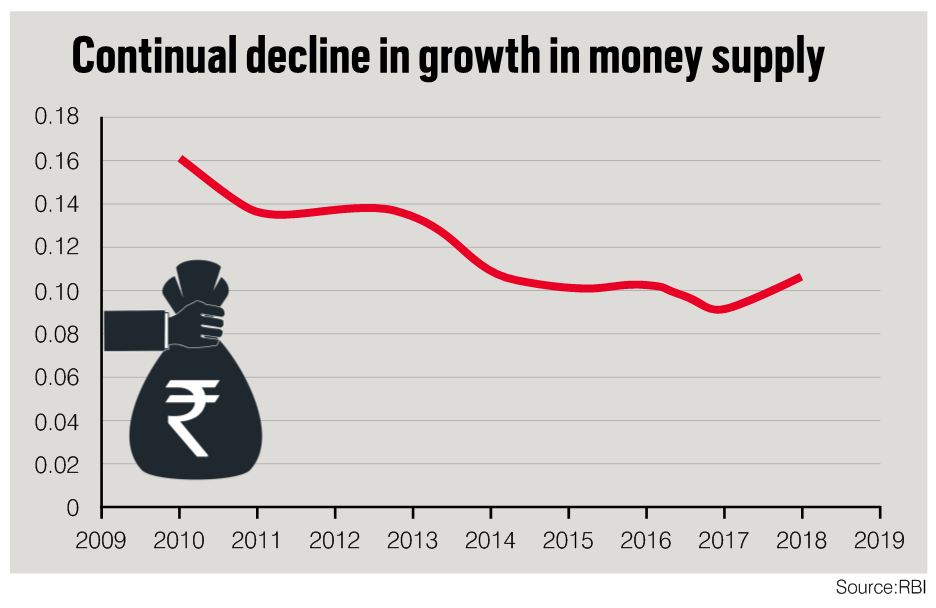 What makes it worse is that this deceleration in money supply growth is accompanied by a sharp drop in the income velocity of money, which indicates a slowdown in the circulation of money. Money circulation is vital for economic growth—the more rapidly and the more times each rupee circulates, the greater the liquidity in the system.

The graph shows a substantial and continual decline in the velocity of money. People are hoarding cash at an increasing rate. Consumer deposits in banks grew at an annual rate of 17 percent from 2004 to 2014, but have since declined sharply to 4.8 percent per year—a 12 percent drop in deposit growth is substantial and problematic. Household savings have also dropped from their peak of 25.2 percent in 2009-10 to 16.3 percent. Clearly, liquidity has been sucked out of the financial system.

Restoring liquidity in the system is the first step to reviving the economy, and the onus falls on the RBI. At the end of World War II, Japanese banks held worthless loans of destroyed factories and could not lend money. The Bank of Japan bought all the bad loans from the banks at face value. This allowed them to start lending again and immediately injected liquidity into the system. In 2008, the US Federal Reserve injected liquidity into the system by buying bad mortgage loans from the banks. The RBI should do the same: buy all the NPAs from the commercial banks at face value and inject liquidity into the system. With the bad loans off their books, banks can start lending again. Inflationary pressures can be controlled by requiring banks to lend these funds for long-dated projects or by offering zero-interest loans to the government for investment in infrastructure, education and retraining.

The current RBI policy of small rate cuts has a minimal effect on liquidity because the financial system is not broad enough to transmit these rate reductions into the real economy.

Banks have a near-monopoly on credit, evident from the fact that India’s cost of financial intermediation (difference between lending rates and deposit rates) at 5.6 percent is the highest in the world. Due to this monopoly in credit markets, banks are hesitant to pass any rate cuts into the real economy. The seven rate cuts between 2015 and 2018 brought the repo rate from 8 percent to 6 percent but did little to affect growth because only 25 basis points of it were transmitted into the credit market. What the economy needs is not a cut in the price of money (rates) but an increase in the supply of money (liquidity).

REFORM OF THE FINANCIAL SECTOR

A country cannot sustain economic development if its financial system is in a crisis. India’s financial system is broken. It is one-dimensional, almost entirely dependent on a banking system dominated by inefficient state-run banks. Short-term deposits of household savings are used to finance long-term, capital-intensive projects, resulting in a liquidity and maturity mismatch that eventually leads to economic fragility. The IL&FS disaster and the crisis in the shadow banking sector (non-banking financial companies) are largely the results of mismatched maturities in an inefficient financial system. 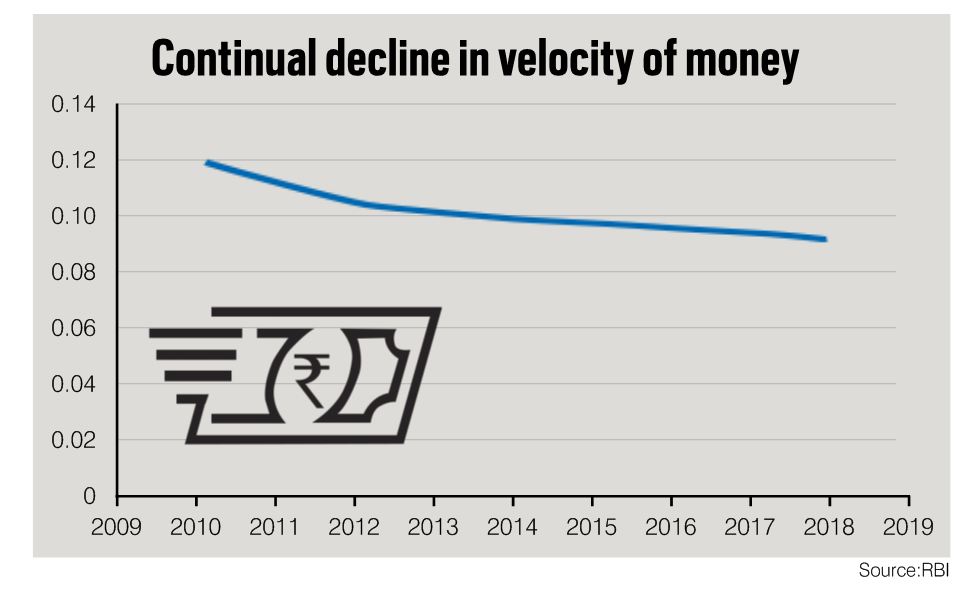 Eighty-five percent of bank deposits have a maturity of less than five years, with the vast majority (44 percent) in the one to two-year maturity. On the loan side, banks are urged by the government to lend for long-dated corporate investments in government-determined priority sectors. Eighty-three percent of all loans to industry were given to large companies, and only 17 percent to small and medium-sized companies.

An efficient financial system provides multiple investment opportunities for consumers and a wide range of credit sources for borrowers. This competition ensures the efficient allocation of capital and a market-determined price for credit. Investors interested in longer-term maturities get matched with borrowers with long-maturity liabilities. Investors interested in higher returns get matched with high-risk projects. But that is not the case in India’s bank-dominated system. The country needs to build a robust credit market with a wide range of credit instruments from corporate bonds, municipal bonds, asset-based securities, supply-chain credit instruments and so on. Immediate steps are required to liberalise the financial sector starting with a revamp of the Securities Exchange Board of India and the burdensome regulations it places on both investors and corporate borrowers.

India needs a large number of small community banks that will lend at the local level. The US, with 6,800 banks, and Germany, with 2,000 banks, have built successful credit systems through a large network of small community banks. These local banks have familiarity with their immediate ecosystem and are better positioned to lend money to good locally-owned businesses in their communities. India too has a network of regional rural and cooperative banks, but it needs to be expanded ten-fold. The recently proposed loan “fairs” could be used to launch the growth of local community banks in every district of the country.

Most developed economies have an independent budget evaluation office to provide policy makers with non-partisan facts on the true cost of government projects, including their hidden opportunity costs. Such an institution, often called the Parliamentary Budget Office, exists in many developed economies. The US has the Office of Management and Budget, which is responsible for evaluating the quality of proposed government programmes and policies. An institution like this, run by trained professionals, can provide hard facts on the efficacy of government programmes. This will allow policy makers to understand the real cost of proposed programmes. A body like this is an imperative in India where most parliamentarians, and the bureaucrats who advise them are not trained in economics and finance and are, therefore, unable to evaluate the effectiveness of proposed government programmes.

There is a myth, perpetrated by the government that higher tax collection will create economic growth. The problem is that they’ve got the causality wrong. Increased tax revenue is the result of economic growth and not the cause of it. The economic variable that the government should, therefore, attempt to maximise is economic growth and not tax collection. Some of the current economic crisis can be attributed to the Robin Hood-style politics of collecting taxes from those who create wealth and giving it to the freeloaders of society. One must first create wealth before it is distributed.

Taxation is like a hole in a bucket which takes water (money) out of a larger bucket (private sector) into a smaller bucket (government). This transfer does not increase the amount of water. Essentially, no new wealth is created from the tax system.

The government’s recent steps to cut corporate tax are a welcome move. I have advocated abolishing all existing taxes—income, corporate, capital gain, etc., and putting in place a simple consumption tax of around 10 percent on all goods and services consumed by the citizens. Like GST, the tax is passed through to the consumer and imputed into the final price of the item consumed. Such a tax would be easy to administer, would be broad-based and fair and unleash the animal spirits of growth like never before witnessed in economic history.

At its core, India is still a socialist economy where the government controls most means of production. Through its state-run banks, the government controls 70 percent of the country’s capital, and through the RBI, it controls the international movement of capital. State-run monopolies control major industries like petroleum, coal, power distribution, utilities, transport, railways, defence and water resources. Sixty percent of the labour force in the formal sector is emp­loyed in the public sector, and private companies with more than 100 employees require the government’s permission to fire employees.

The government owns large land banks, directly and through public sector companies that make it difficult for companies to acquire land without governmental clearance. And with 52 ministries, 24 more than any other country, the central government ensures that it controls large swathes of economic activity in the country.

For India to reach its economic potential, it has to become a free-market and competitive economy, relying on the innovation and entrepreneurship of the private sector to propel this growth. This would require the political leadership to accept the reality that its role is secondary to that of the private sector. For the economy to perform to its potential, the government must reform itself and reduce its control over the factors of production, especially capital. Such changes could include a reduction in the number of ministries, massive deregulation, wholesale reduction, retraining and reemployment of government employees, decontrol of state-run monopolies and privatisation of the banking sector.

It is remarkable that Estonia, a country that got its independence from communist Soviet Union in 1991, is ranked sixth in the 2017 Economic Freedom Rankings. India is ranked 143rd out of 180 countries.

How did Estonia get there so quickly? Its reforms included wholesale privatisation of state enterprises, removal of all tariffs to free trade, a simplified tax system with flat rates and low indirect taxation, an independent judiciary, a competitive banking sector that operates with minimal state intervention and above all a revitalised effort to move toward limited government and greater economic freedom.