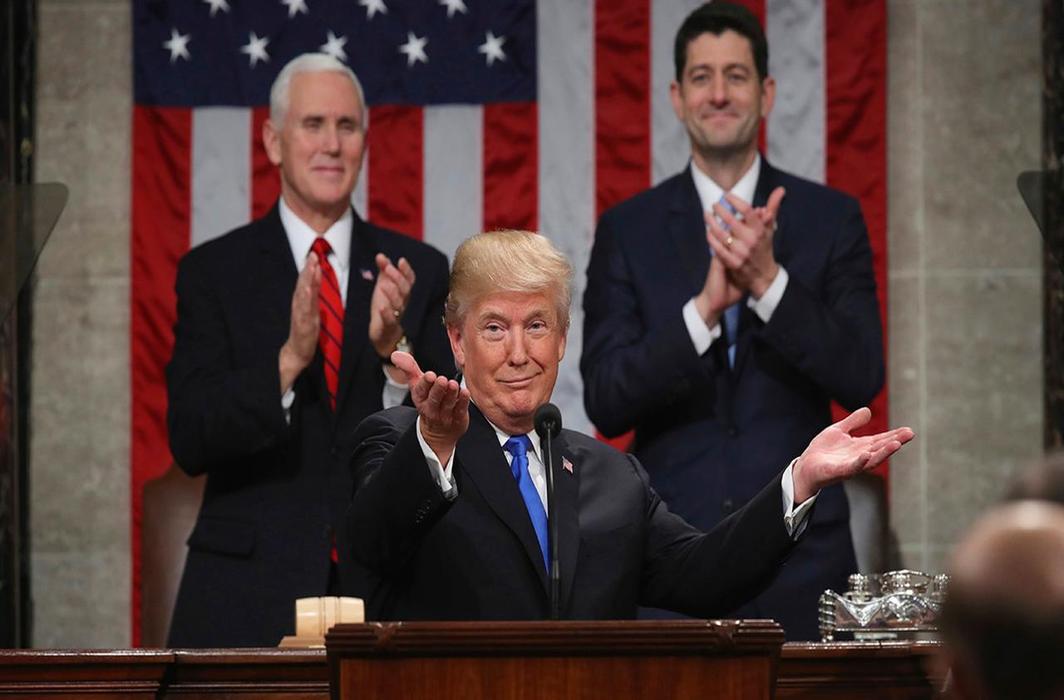 Above: The address reflected Trump’s style, with rhetoric about sunny days ahead followed by implied threats/Photo Courtesy: media.abclocal.go.com

Donald Trump’s speech was all about himself, immigrants and expanding  businesses, and had nothing about issues plaguing the country

Every nation has political rituals that carry on long past the circumstances that created them. In India and the US, there are apt examples of this. Last week, President Donald Trump gave the 115th State of the Union address to the Congress, an obligation enshrined in the US Constitution and which states that the president shall “from time to time….give Congress information on the state of the Union”. Trump, in a 90-minute performance, concerned himself less with the state of the Union than with giving himself an A+ for his work as president in his first year.

This ritual seemed more important at the end of the 18th century. Then it took news months to reach the corners of the expanding American empire. No telegraph, no telephones, no radio, no television, no electricity, no internet, not even typewriters. Today, a terrorist’s sneeze or worse is instantly communicated globally. The concept of “gone viral” has become a regular element of 21st century communication whether the content is amusing, startling or horrific. Few governments will like the threat that all US aid will be conditional on “liking” the USA at the UN (and perhaps on Facebook as well.)

It was a speech that used a wide variety of guests in the audience as props for his point of view. He congratulated his response to floods and hurricanes, to crimes being blamed on gangs of immigrants and to businesses expanding be-cause of the massive tax cut the Republicans engineered.

It was typical Trump, soaring rhetoric about sunny days ahead followed with implied threats: agreement on a border wall with Mexico is a must before providing any relief for the Dreamers, children brought here as infants illegally by their immigrant parents. More than that, he wants an end to the US green card lottery and severe restrictions on family unification rules, what the GOP calls chain migration. This restatement is interesting because the opposition Democratic Party has made it clear that it won’t vote for a wall with Mexico as a condition of immigration changes or saving Dreamers.

Positive adjectives abounded in the US president’s speech, perhaps not a surprise. What was startling was that he never once mentioned his election triumph, the debacle with healthcare legislation, Hillary Clinton, Russia or the probe by the special prosecutor. The federal debt level, traditionally a big Republican worry, got nary a mention despite the probable reduction in government revenue.

Trump avoided environmental issues other than to claim that clean coal was making a comeback. He hinged his national infrastructure plan, in effect, on easing or eliminating any regulatory or environmental rules that, in his words, “delay” the permits needed for construction.

His delivery was smooth and relatively low-key. He stayed on script. He applauded himself frequently with vigorous hand clapping. It was a speech for his base delivered without the bombast that seemed so successful when campaigning.

US President Donald Trump has demonstrated that he can take back what he says with a tweet. How quickly will he undercut himself and his political allies on the details of this speech to Congress?