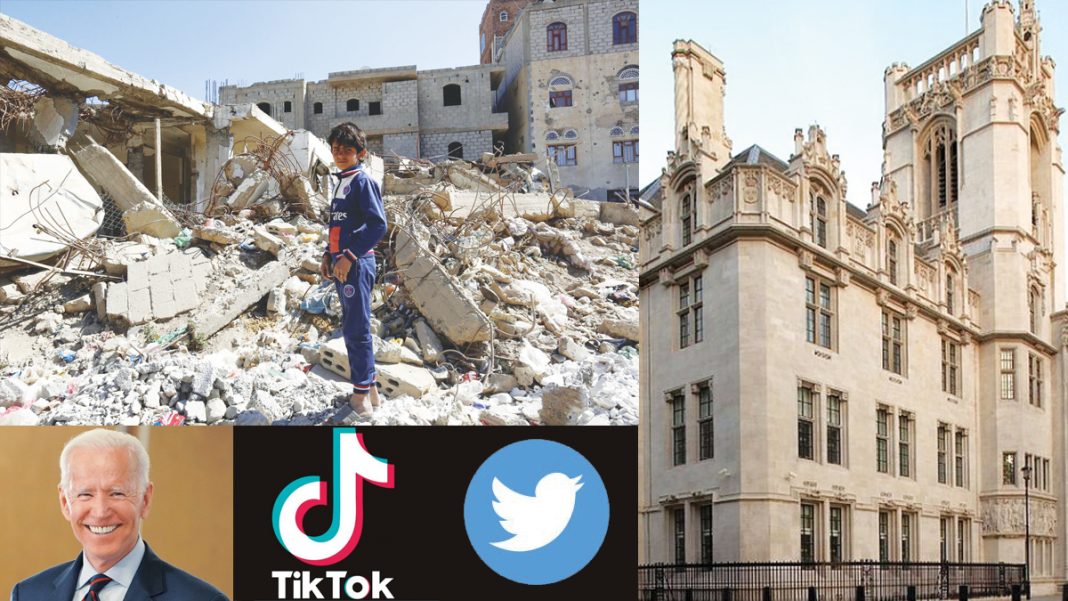 In what promises to be a great precedent, two Yemeni men have appealed to a German court, saying that US drones, which took off from a German air-base operated by the US, killed their family members in Yemen, and that Germany should be held responsible to a large extent for this. The air base is in Ramstein-Miesenbach, Germany. The appellants argue that the German government will have to do more to protect “the plaintiffs’ right to life.”

Expectedly, US military authorities have not acknowledged the attacks, saying that the base was used only to “conduct operational-level planning, monitoring, and assessment of assigned airpower missions throughout Europe and Africa.”

The original reaction of a top German court was that drone operations based in Germany aren’t required to comply with international law.

Andreas Schuller, head of ECCHR’s International Crimes and Accountability team, has been quoted as saying: shared: “Germany must do more to protect the right to life of the Jaber family. The danger posed by drone attacks via Ramstein has not been averted, which is why we are turning to the Federal Constitutional Court today.”

Austerity measures by the British government, leading to funds cuts, and the Covid-19 pandemic has hugely affected the functioning in British courts. The decade old financial crisis meant that spending on publicly funded criminal legal defence was by stages slashed by 35% (in real terms), said Britain’s parliamentary library. This happened along with spending cuts on civil legal defence (for housing and immigration cases, for example.

As the cuts grew deep, many courts remained empty, as the number of “sitting days” for judges was reduced. Quite like what is happening in Indian courts, lawyers have protested, saying that these changes would damage the famed justice system of that country, depriving litigants the right to a fair trial.

As if that was not enough, the Covid-19 pandemic just forced shutters down on the courts. Trials were affected, as lawyers, judges and jurors were infected. The backlog has grown to be huge –although nothing compared to the pendency in Indian courts – growing to over 53,000 outstanding cases in England and Wales’ crown courts (which try more serious crimes). This is a 44% increase from the previous year. In waiting are another 412,000 cases in lower courts.

Biden push for ethnic diversity in US courts

As conservative judges virtually rule US Federal Courts, new President Joe Biden has formulated policies and actions that would effectively widen the ethnicity of the composition of judges, incorporating more African American candidates. The conservative nature of judges was further bolstered during the Donald Trump era.

The President has now announced his first set of court nominees, which includes “barrier-breaking candidates”. The entire effort is to counterbalance the dominance of conservatives confirmed over the past four years (of the Trump administration).

The leading change will come in the form of US District Judge Ketanji Brown Jackson, who has been nominated by Biden to the powerful US Court of Appeals for the DC Circuit. Jackson, an African American lady judge, will fill Attorney General Merrick Garland’s former seat. This position will ensure that in case a judge steps down in the US Supreme Court she automatically gets elevated to the high position.

Jackson is a former public defender and member of the US Sentencing Commission.

The White House has announced 10 federal court nominees and one nominee for the District of Columbia Superior Court. The President’s two other federal appeals court nominees are also African American ladies.

A Russian court has imposed a $116,778 fine on microblogging platform Twitter for failing to remove banned content. Twitter, like other social media apps and sites, has been at the receiving end of government scrutiny in several countries. In Russia, the failure to remove the banned content went against the country’s Internet legislation.

According to a report that has quoted the Xinhua news agency, the controversial content allegedly urged minors to take part in illegal protests. Content promoting drug use and the spread child pornography have also been cited.

The TASS News Agency of Russia has said that the punishment was handed out to Twitter by Moscow’s Tagansky District Court and Twitter was given 60 days to pay up the 8.9 million Rouble fine. Twitter had allegedly refused to delete the content in question. The court is also considering action against Facebook and Google.

The Peshawar High Court has rescinded its earlier order of imposing a nationwide ban on TikTok, with a rider. The Pakistan Telecommunication Authority has announced that the popular video-sharing social media app of Chinese origin will be unlocked across Pakistan, even as the court has made it clear that “vulgar and objectionable content” had to be made inaccessible to Pakistani users to prevent further action against the app.

The original ban had come over concerns of alleged “obscene content . . . unacceptable for Pakistani society.” The PTA, while announcing the lifting of the ban, has sent a strict advisory to the management of TikTok’s to ensure that no such content is available in future. While the ban of TikTok in India has been more of a political decision, Pakistani Chief Justice Qaiser Rashid Khan had agreed that the app showed videos that were “immoral and unsuitable for Pakistani society.”