Can Putin be put on Trial for War Crimes?

As Russian atrocities against Ukraine build, so do the calls to bring the perpetrators to justice amid increasing signs of what is classified as war crimes under the Geneva Conventions. The International Criminal Court is already in Ukraine to gather and verify evidence, signalling a strong push to bring Russian President Vladimir Putin and his associates to trial. What are the possibilities? 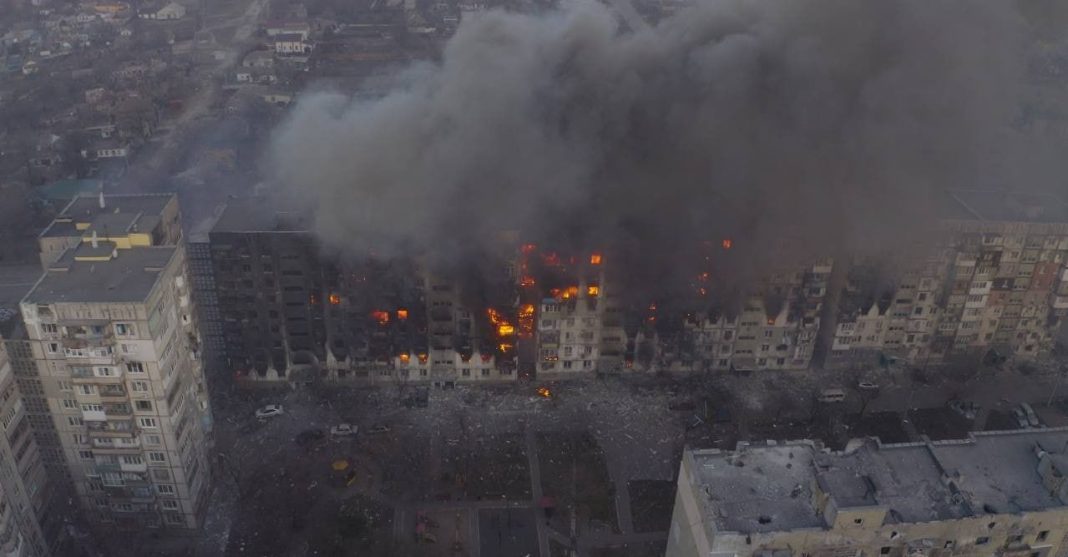 The crimes are piling up. Investigators and journalists have found what appears to be evidence of the deliberate killing of civilians in Bucha, a town on the outskirts of Kyiv, in Ukraine, and other nearby areas.

Ukrainian forces say they have found mass graves and there is evidence of civilians having been shot dead after their feet and hands were bound. There was also the bombing of a maternity hospital. The word “children” was written in giant letters outside the building. In addition, there have been Russian strikes on a theatre in Mariupol which led to mass deaths. The latest is the bombing of a train station where hundreds of men, women and children were gathered to leave for safer areas.

As Russian atrocities against Ukraine build, so do the calls to bring the perpetrators to justice. US President Joe Biden and Britain’s Prime Minister Boris Johnson have both said Russian President Vladimir Putin should be tried for war crimes. “This can be an actual, have a war crimes trial,” Biden said after horrific images of the killings in Bucha appeared online. Johnson said much the same after he paid a visit to Kyiv and toured the city with Ukrainian President Volodymyr Zelenskyy. In March, US Secretary of State Antony Blinken said Russia had “destroyed apartment buildings, schools, hospitals, critical infrastructure, civilian vehicles, shopping centres, and ambulances”—actions that the US said amounted to war crimes.

Investigators from the International Criminal Court (ICC) are already working in Ukraine to gather and verify evidence, and a number of nations have already referred the case to the global court, signalling a strong push to bring such crimes to trial. Ukraine has also set up a team to gather evidence.

Today, the ICC and the International Court of Justice (ICJ) have roles upholding the rules of war. The ICJ rules on disputes between states, but cannot prosecute individuals. If the ICJ ruled against Russia, the UN Security Council (UNSC) would be responsible for enforcing that. Russia is one of the Council’s five permanent members and could veto any proposal against it.

There are also practical and political limits to what the ICC can do in any of the crimes it investigates and prosecutes. Among those challenges is the fact that neither Russia nor Ukraine is a party to the ICC. Ukraine, however, does recognise the Court’s jurisdiction which means the ICC can prosecute those responsible for atrocities committed in Ukraine.

The ICC’s basic remit is to try war crimes, genocide, crimes against humanity—collectively known as atrocity crimes. The ICC is the only legal mechanism for holding the Kremlin to account. The ICC’s chief prosecutor, British lawyer Karim Khan QC, says: “There is a reasonable basis to believe war crimes have been carried out in Ukraine” but it seems unlikely that Putin or any of his high-level associates would ever stand trial.

Also Read: Delhi High Court adjourns appeal on the statement by Delhi CM Kejriwal to pay rent of tenant who are unable to pay due to poverty

Firstly, investigators have to consider what constitutes a war crime. These are contained in treaties called the Geneva Conventions. Under the treaty, civilians cannot be deliberately attacked, nor can the infrastructure that is vital to their survival. Serious offences, such as murder, rape or mass persecution of a group, are known as “crimes against humanity”. Then there is genocide, identified in international law as the “deliberate killing of people from a particular national, ethnic, racial or religious group, with the intention of destroying the group—whether entirely or in part”. Genocide is a specific war crime that is considered far more serious than the illegal killing of civilians. The law requires proof of the intent to commit genocide. “The law is clear. It is a crime to intentionally target civilians, it is a crime to intentionally target civilian objects,” Khan told CNN’s Anderson Cooper. He, however, said that a burden of proof must be established and a judicial process must play out.

The ICC is the only body that can play that role. It was established in 1998 after what is called The Rome Statute, named after the UN’s Rome conference where 160 different governments convened to consider an international criminal court as the first permanent international court. The ICC came into force only in 2002. It is based in The Hague and has its own judicial staff, but operates in coordination with the United Nations, even though it is considered an independent body. The Court has 18 judges serving nine-year terms. The ICC is the modern successor to Nuremberg, which prosecuted key Nazi leaders in 1945.

The prosecution process itself is quite intricate. If there is enough evidence of war crimes and mass civilian killings, the prosecutor will ask ICC judges to issue arrest warrants to bring individuals to trial in The Hague. That is where the Catch 22 lies. The Court doesn’t have its own police force so relies on individual states to arrest suspects. Russia is not a member of the Court—it pulled out in 2016 and neither will Putin extradite anyone in Russia charged with atrocities. In theory, the UN Security Council could ask the ICC to investigate this offence. But again, Russia could veto this.

In fact, Russia continues to deny any atrocities, instead claiming that the mass killings and deaths are “faked” by Ukraine and insists that “not a single civilian has faced any violent action by the Russian military”. The huge number of apartment buildings destroyed, says Russia, also housed legitimate military targets. However, what can undermine that claim are the efforts by NGOs, the Ukrainian government and global independent media houses that can document evidence of the killings and rapes via photos, interviews and documentation. The US, China, Russia, Ukraine and, incidentally India, are not members of the Court, which has often been criticised for focusing too heavily on Africa and applying “selective justice”. Now, with the destruction of civilian targets in Ukraine and the undeniable evidence of mass killings in areas once occupied by Russian soldiers, the ICC, says Khan, “will issue arrest warrants if prosecutors can show “reasonable grounds” to believe war crimes were committed. America not being a member of the ICC is also diplomatically embarrassing and is already prompting accusations of “western hypocrisy”.

Another option might be a special tribunal organised by a group of countries. The Nuremberg tribunal, or instance, was established by the US, Britain, France and the Soviet Union to prosecute Nazi leaders after World War II. Similar tribunals were set up to prosecute war crimes committed during the Balkan wars in the early 1990s and during the Rwanda genocide in 1984. There was also an UN-backed Special Court for Sierra Leone, established in 2002 to prosecute those responsible for atrocities perpetrated during the country’s civil war in 1996. The International Criminal Tribunal for the Former Yugoslavia indicted its first head of state, the then Yugoslav president, Slobodan Milošević, in 1999, and took him into custody in 2001. His trial began in 2002 and was under way when he died at The Hague in 2006. Charles Taylor, the former president of Liberia, was found guilty of aiding and abetting war crimes and crimes against humanity after four years of hearings at the Special Court for Sierra Leone. Similarly, there was the Extraordinary Chambers in the Courts of Cambodia, which prosecuted the crimes of the Khmer Rouge, under the UN umbrella.

Unlike other international courts, like the European Court of Human Rights, the ICC can only try individuals, not nation-states. That theoretically includes sitting heads of state, although that’s never happened in the Court’s history, and is unlikely to happen in the context of Russia’s invasion of Ukraine. The Court has no enforcement mechanism, so while it can issue arrest warrants, it relies on national authorities to execute those warrants. The Court tries people, not countries, and focuses on those who hold the most responsibility. Putin could, therefore, theoretically be indicted by the Court for previously ordering war crimes in Crimea. However, the ICC does not conduct trials in absentia, so he would either have to be handed over by Russia or arrested outside of Russia. Both options are beyond the bounds of possibility. Court proceedings can be brought in one of two ways: Either a national government or the UN Security Council, where Russia holds veto power, can refer cases for investigation. The current ICC position is based on requests by 39 national governments, a majority of them European. As Khan told CNN: “I want to emphasize that I’m willing to speak to all sides, and not just the Ukrainian side, but also the Russian Federation, state parties and non-state parties alike. This institution is not political. We’re not part of the geostrategic or geopolitical divisions that we witness around the world.”

Here’s the bad news. If the wheels of justice grind exceedingly slow, international justice barely moves at all. Investigations at the ICC take many years. Only a handful of convictions have ever been won. Now, the pandemic has slowed the judicial process even more. The ICC also depends on donations by member countries for its existence and a genuine lack of resources has further crippled the Court.

The ICC employs over 900 personnel from roughly 100 countries and conducts proceedings in English and French. It held its first hearing in 2006, concerning war crime charges against Thomas Lubanga Dyilo, a Congolese warlord accused of recruiting child soldiers; his subsequent conviction in 2012 was the first in the Court’s history.

The Office of the Prosecutor has opened 12 official investigations and is conducting an additional nine preliminary examinations.

A total of 46 individuals have been indicted in the ICC, including Ugandan rebel leader Joseph Kony, former President Omar al-Bashir of Sudan, President Uhuru Kenyatta of Kenya, the late Libyan head of state Muammar Gaddafi, President Laurent Gbagbo of Ivory Coast and former Vice President Jean Pierre Bemba of the Democratic Republic of the Congo.

Linking Putin to other reported war crimes in Ukraine, like the indiscriminate killing of non-combatants, targeting civilian facilities like train stations and hospitals, and sexual violence, is a massive undertaking and requires documentary evidence—like specific orders or testimony from insider witnesses which link actions of soldiers on the ground to officials in the Kremlin. Taking it to the ICC and then bringing Putin or his generals and associates to trial is still an impossible dream.