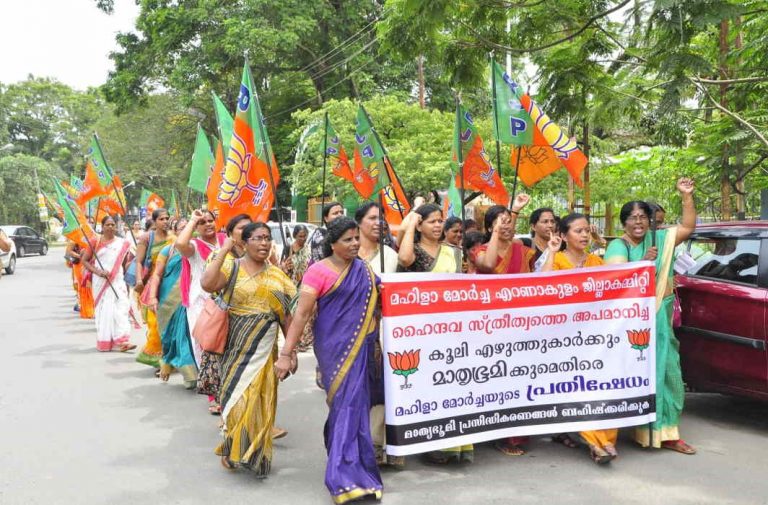 Nigerian novelist Chimamanda Ngozi Adichie once famously stated that the consequence of the single story is that it can break and repair the dignity of the people. The leftist intelligentsia and certain media houses in Kerala are facing the brunt of an attack by a major section of Hindu society for unleashing a single story with the alleged intention of denigrating the Hindu community and its value system.

The immediate trigger was the publication of a novel Meesha (Moustache) by S Hareesh, in Mathrubhumi Weekly with the novelist casting aspersions on Hindu women going to temples for worship. As the leftist intelligentsia and politicians start calling rightwing outfits “fascists” for criticising the remarks, the floodgates for harsh criticism have been opened with social media forums spewing venom.

Hareesh’s novel is allegedly heaping disrespect on Hindu women who go to temples to offer prayers. One of his characters in the novel says that women dressed in colourful attire go to temples with the intention of expressing their willingness to have sex with the priests. As infuriated women and men collectively opened the floodgates of criticism, the novelist had to withdraw the novel from publication, probably after pressure from the media house itself. Its aftermath is that every leftwing writer, politician and the so-called cultural leaders are in the forefront of supporting the writer. Not to be left behind, opposition leader Ramesh Chennithala also came forward to protect the writer. In the meanwhile, it seems, everybody has lost a sense of balance and is forgetting to give divergent views space.

Mathrubhumi, which has a long tradition of upholding values, also seems to have lost direction and is giving no space for victims to represent their views, according to rightwing Hindu outfits like Hindu Aikya Vedi.

RV Babu, Hindu Aikya Vedi’s state general secretary, told India Legal that they had not launched an agitation against Mathrubhumi despite the fact that a large number of Hindus were reacting sharply through the social media.

“We will consider exhorting people to boycott Mathrubhumi if it is reluctant to tender an apology. The fact that the novelist has withdrawn the novel is not enough as he has served his purpose by publishing an extract of his work,” he said. He pointed out that Mathrubhumi should have shown greater care when it granted space to a writer who had a track record of attacking Hindu religious sentiment.

Referring to the political and cultural leaders’ criticism of the rightwing outfits’ protest against the novel, Babu said such criticism was selective and politically motivated. “When writer Santhosh Echikkanam was attacked for writing a short story called Biriyani, none of the so-called cultural leaders came to protect him. Nobody spoke a word against the forces which attacked poet Pavithran Theekkuni who wrote the poem Parda. No one from the leftist parties or even from   the Congress came to support film director T Deepesh who made the film Pithavinum Puthranum (For Father and Son). None of the leftist parties or the Congress questioned the banning of a book by Sunny Kutty, a Pentecostal follower who had to undergo severe custodial torture for writing a book which     is claimed to be critical of Islam,” he pointed out.

The allegation against Hareesh is that he has been denigrating Hinduism and its sages. In Rasavidyayude Charithram,  one of his stories published in 2003, he depicts Sage Ayyagaru as a person engaged in perfecting the alchemy of converting cheap metal into gold.

Ayyagaru’s disciples and great sages and reformers like Sree Narayana Guru and Chattampi Swamikal (character names Nanu and Chattampi) were depicted as cheap metal. In another story, he insults the community of Vishwakarma Jas (carpenters, blacksmiths and the like) by making one of the community members call themselves disciples of a dog. Reason: They put a leg on a log while working on it to prevent it from moving, just as a dog would place its paw on its plate.

As Chief Minister Pinarayi Vijayan and opposition leader Chennithala have come forward to champion the cause of freedom of expression, as of now he is not facing any problems.

Speaking to India Legal, former Sahitya Akademi president and noted writer Perumbadavam Sreedharan said it was natural for a writer to write against the society in which he lives. “The writer has the right to be in continuous fight against decadent values. There has been a tradition of writers posing inconvenient questions and deconstructing epic heroes like Sree Ram and Sree Krishna. But while I criticise these personalities, as a writer I should restrain myself from making emotional outbursts hurting the sentiments of believers,” he said.

Poet P Narayana Kurup, while coming down heavily on the anti-Hindu narrative in Hareesh’s novel, said: “The Mathrubhumi Weekly’s decision to give Hareesh, who had a track record of spewing venom against Hindu sages, should have a dubious intention.” Asked why Hindu society, if it was hurt badly, did not react in an extreme manner, he said it was not characteristic of Hindu society in Kerala to do so.

Writer C Rahim rejected the way Hareesh incorporated certain remarks which could be treated as against Hindu women. “There is no wrong in opposing an ideology or an institution. We have so many texts and subtexts about the Ramayana with some of them going to the extent of unleashing strong attacks against Lord Sree Ram. But in Hareesh’s novel, no such critical purge is intended. On the contrary, he opts to incorporate some misplaced remarks,” he points out.

Women writers and activists, who on every given occasion come forward to fight for their rights and attack any attempt to denigrate the dignity of women, are conspicuous by their silence in responding to the issue. Cultural historian Pradeep Panangad told India Legal: “In a vibrant democracy free speech and thought should be encouraged. At the same time, writers should understand that there should be restraint on their part. No writer has a special privilege.”

The rightwing Hindu outfits say that Mathrubhumi, once considered a top literary magazine in Malayalam, is now a victim of the political ambitions of Managing Director Veerendra Kumar. There could be an element of truth in this as he is a former state minister and currently a Rajya Sabha MP from the Janata Dal (Sharad Yadav) faction.