Both Vice President Kamala Harris and President Joe Biden travelled to Atlanta to express empathy for the victims of a racist attack and in support of the nation’s Asian and Pacific Islanders community now increasingly the target of hate crimes. 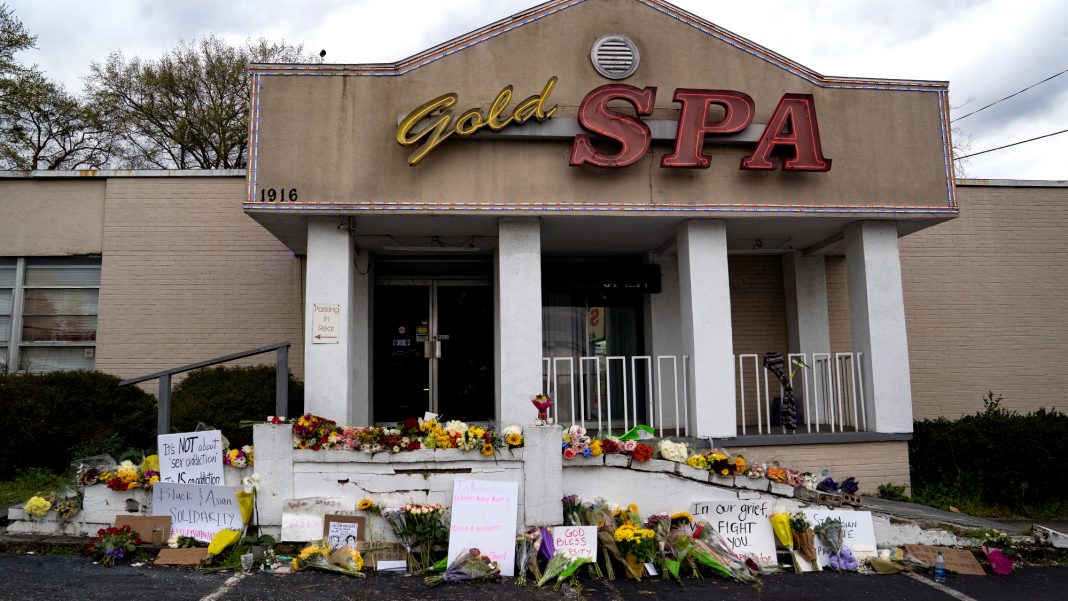 US Vice President Kamala Harris, the daughter of a mother from Tamil Nadu, left no doubt where some of the blame belongs for violence in Atlanta, Georgia, that killed six Korean-American women in a shocking shooting incident. Without directly naming former president Donald Trump, she said: “For the last year, we’ve had people in positions of incredible power scapegoating Asian-Americans. People with the biggest pulpits spreading this kind of hate.”

Like Covid-19, domestic terrorism has many variants, all of them dangerous, but it cannot be cured with a vaccine. This is not a US-only phenomenon. Recent years of demagogues in political leadership has encouraged “anti-OTHERS” in multiple nations. The Atlanta shooter is a 21-year old man with some serious mental health issues, who told police the victims were targeted at a spa because of his anger at having a “sexual addiction” in conflict with his evangelical Christian family beliefs. He claimed the attacks were a way to eliminate temptation. In three different locations he killed a total of eight people with a gun bought the same day. One police officer described him as “having a bad day,” inappropriate in a nation where non-white suspects get shot for far less.

Both Harris and Biden had travelled to Atlanta to express empathy for the victims. “Because our silence is complicity,” he said: “We cannot be complicit. We have to speak out. We have to act.” Using derogatory language, former president Trump often characterised the pandemic as the “China virus,” or the “Kung Flu.” After meeting with leaders of Atlanta’s Asian-American community, Biden reflected on what he was told: “It’s been a year of living in fear for their lives. They’ve been attacked, blamed, scapegoated and harassed. They’ve been verbally assaulted, physically assaulted, killed.”

According to the Center for the Study of Hate and Extremism at California State University, anti-Asian hate crimes have risen by 150 percent during the pandemic. Such attacks add another dimension to the frequently debated national discourse on race.

Domestic terrorism in a nation with permissive gun laws predicated on the Constitution’s Second Amendment about the right to bear arms is a dangerous component of political and social differences fracturing America. White Christians, raised to believe this is their nation, worry that demographics will make them into a minority with no political clout in the future. When the Constitution was written in the 18th century, America had just won a revolution against a British King, and writers felt it necessary to state: “A well regulated Militia, being necessary to the security of a free State, the right of the people to keep and bear Arms shall not be infringed.”

“For really more than about 200 years, the understanding of the Second Amendment was that it gave state militias the right to keep and bear arms but not individuals,” said Lawyer Jeffrey Toobin. That changed in 2008 in the famous decision of District of Columbia vs Heller where Justice Antonin Scalia writing for the Supreme Court said that, under the Second Amendment, individuals had a right to keep handguns in their residences.”

Various state legislatures have written their laws to allow almost any type of weapon, and thus we have “patriot militias” parading about with automatic military grade weapons. The pandemic, with its death toll, lockdowns, social restrictions and economic pain, has exacerbated the mental health issues in America, which is an explanation but not an excuse. Biden with the nation’s first female vice president and one of Asian descent wants to be more than just a symbol of the rejection of racial animosity and bias. Speaking for both of them, Harris said, “Racism is real in America, and it has always been. Xenophobia is real in America, and always has been. Sexism, too.”

The US currently has around 44.7 million immigrants or foreign-born individuals. According to the Pew Research Center, by region of birth, immigrants from South and East Asia combined accounted for 27 percent of all immigrants with Chinese Americans accounting for around 4.9 million of the total Asian population in the US. Asian America-Pacific Islanders advocacy groups want the Biden administration to involve more than Harris in government. Said one source, “We admire the selection but she cannot be our points person for this. That’s not her job; because she’s too busy, she’s vice president, she’s got significant other responsibilities…Give us a senior staff person in the White House who gets our issues.”

Katherine Tai, who was sworn in last week as the US trade representative, is the first Asian American to hold the position since it was created 60 years ago. Indian-American Kiran Arjandas Ahuja has been nominated to head the Office of Personnel and Management, a federal agency concerned with more than two million civil servants. A lawyer and civil rights activist with the Obama administration experience, she will be if confirmed by the Senate the first Indian-American to occupy this high-profile post. Dr Vivek Murthy awaits confirmation to be Surgeon General, a position he held under President Barack Obama. This is a high-profile post, especially in times of national health issues, but it is not a cabinet-level position.

Nearly 150 years ago, the post-civil war reconstruction in the US ended from persistent opposition to creating racial equality. Now, after four years with the first seriously authoritarian presidency in modern times, the Democratic political party is attempting a second reconstruction. If successful it may impact governing philosophies around the world.