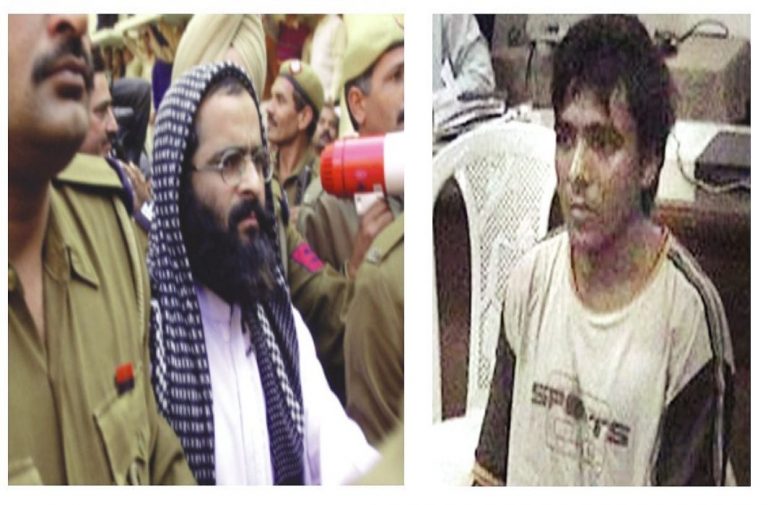 Above: (L-R) Afzal Guru was deprived of his right to effective legal aid; lawyers in India had also refused to defend Ajmal Kasab

Increasingly, it has become the norm for Bar Associations to issue resolutions urging lawyers not to appear for the accused in certain cases, forcing High Courts and the Supreme Court to intervene. The latest was the Uttarakhand high court having to reiterate the age-old judicial axiom that every accused has a fundamental right to legal representation regardless of the offence he is accused of. The Court quoted Article 22(1) of the Constitution of India, which lays down this right, and added: “Any fetter placed on the fundamental right of the accused to be defended by a lawyer of his choice, be it for economic or other reasons, is illegal and unconstitutional.” What was being underlined was the professional duty of lawyers to represent an accused, regardless of personal views as to the guilt of the client. In fact, Clause 15 of the Bar Council of India Rules says exactly that.

In the latest case, the Uttarakhand bench set aside a resolution of the Kotdwar Bar Association which had barred lawyers from appearing on behalf of the accused in a case involving the murder of a local advocate. The Bench opined that “…we face a situation today where the miniscule few, who dare to tread the solitary path of taking up the cause of the damned, are threatened with dire consequences, for nothing more than the discharge of their duties as an Advocate…such resolutions are wholly illegal, against all traditions of the Bar, and against professional ethics”.

The original notification had threatened Association members with membership termination if they appeared for the accused in the case. However, after the High Court castigated the Kotdwar Bar Association, a clarification was issued that there would be no such termination.

The provocation was a complaint by advocate Kuldeep Agarwal that he had been harassed by Association members for taking up the case of Vinod Kumar, one of three persons arrested for the shooting of a member of the Kotdwar Bar Association, Sushil Raghuvanshi, in 2017. Many of the resolutions and stands adopted by Bar Associations and individual lawyers are also fuelled by public opinion and political expediency. The decision to prevent lawyers from defending the five men accused of brutally raping a young girl, Jyoti Singh, in a running bus in Saket, Delhi, was an example of that. Public anger was visible as was the condemnation by political parties which jumped on the bandwagon. The Saket District Bar Council ordered the 2,500 advocates registered at the Court to avoid representing the accused.

In 2008, Indian lawyers also refused to defend Ajmal Kasab, the Pakistani jihadist who was captured alive while taking part in attacks on Mumbai which killed 166 people. He was represented by a government-appointed lawyer and eventually executed after due process of law. More recently, the Supreme Court had to step in when the District Bar Association of Gurugram passed a similar resolution in the case of sexual abuse of a student in Ryan International School which had also attracted a lot of media attention. The apex court said: “It is necessary to state without any hesitation that an accused, whatever the offence may be, has the inherent right to be represented by a counsel of his choice (as the apex court had laid down in the Hussianara Khatoon case in 1979). The tradition of the bar and the fundamental conception pertaining to access to justice does not permit any bar association to pass a resolution of the nature that had been done.” In 2010, the Supreme Court had ruled that lawyers or their associations cannot refuse to appear for accused whether they are terrorists, rapists, murderers or any others, as such refusal would be a violation of the Constitution, Bar Council norms and the tenets of the Bhagavad Gita.

Lawyers, however, are human beings first and often, personal feelings and public pressure can interfere in cases that are seen as being overly heinous—the bus rape—or anti-national as in the case of Kasab and the Mumbai blasts allegedly masterminded by fugitive Dawood Ibrahim. Afzal Guru, accused of masterminding the terrorist attack on Parliament, was deprived of his right to effective legal aid. Afzal, with no training in law, had to cross-examine 80 prosecution witnesses by himself against a battery of the country’s top lawyers lined up against him. Seema Gulati and Niraj Bansal, the two legal-aid lawyers appointed to defend him, not only left him to fend for himself but, in fact, during the trial, argued against him in court. The Madras High Court recently discharged a lawyer from a criminal case and ruled that appearing for a Maoist is not a crime. “If a Maoist accused of an offence seeks the professional assistance of a lawyer, it is the lawyer’s duty to defend,” said the Court. It would be pertinent to recall the words of veteran lawyer Ram Jethmalani when he was interviewed by a TV channel about such cases. “I decide according to my conscience who to defend. A lawyer who refuses to defend a person on the grounds that people believe him to be guilty is himself guilty of professional misconduct.” Jethmalani famously defended those accused of assassinating Indira Gandhi and the killers of Rajiv Gandhi, as well as representing underworld don Haji Mastan in court.

The rule generally followed in Indian courts is what is called the “Cab Rank Rule”. This, simply put, states that a lawyer cannot deny any person legal assistance who approaches him or her. The logic is that the services of a lawyer should be akin to that of a cab driver at the head of a queue of taxi-cabs who is supposed to take the first passenger requesting a ride. The “Cab Rank Rule” finds mention in the Bar Council of India Rules. The inherent logic behind providing representation to every person is based on the standard rule of thumb that every person is presumed innocent until proven guilty. If a person is not provided legal representation and is not allowed to present his case in the court of law, then his right to fair hearing is impeded and the entire judicial system suffers as a result.

This tendency of Bar Associations to pass such resolutions preventing their members from representing a particular accused is a fairly recent phenomenon. India, in fact, has a sterling history of lawyers defending those accused of the most heinous crimes, including Nathuram Godse, who was given fair representation for the assassination of Mahatma Gandhi, and those accused of killing former prime ministers Indira Gandhi and her son, Rajiv. The dilemma facing lawyers is that despite the Supreme Court and various high courts striking down such resolutions, lawyers who agree to represent the accused in high-profile cases are generally treated shabbily by their Bar colleagues as if they were criminals themselves. The classic case was legendary American lawyer Clarence Darrow who was strongly of the view that every accused, no matter how wicked, loathsome, vile or repulsive he may be regarded by society, had the right to be defended in court and correspondingly it was the duty of the lawyer to defend. His defence in various trials of mass murderers and serial rapists made him known in America as the “Attorney for the Damned”.