With mere 16 months in the chief justice’s office, Justice NV Ramana has managed to write a fresh script for the evolution of the Indian judiciary. India Legal takes a look at his tenure 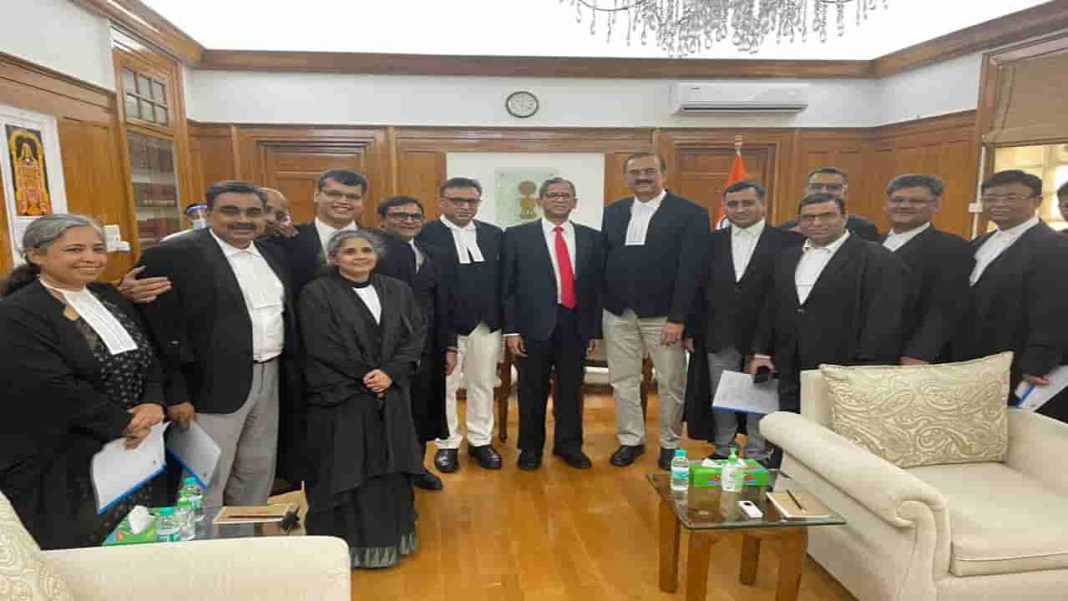 The tenure of a chief justice is an index of the functioning of the entire judiciary. Now that Justice NV Ramana has retired, it is time to take a look at his verdicts and judicial administration.

When Justice Ramana became the 48th chief justice of India (CJI), there was speculation in the judicial corridor that his tenure would be different from that of the previous chief justices. His personality was very low profile and he came across as a calm, gentle and soft-spoken judge. This beguiled many into believing that he would be an average CJI. Justice Ramana took over as CJI at a time when Covid-19 was at its peak, and hearings were badly affected. These were challenging times, but he managed to steer the mammoth judiciary through these troubled times by resorting to online hearings and well-defined SOPs.

The Constitution mandates the system of an independent and autonomous judiciary. In such a situation, one of the main roles of CJI is to maintain the autonomy of the judiciary. This, too, was a big responsibility on the shoulders of Justice Ramana. When he took over, he did a better job than expected. It will not be an exaggeration to say that Justice Ramana had managed to ignite the spark of judicial independence. He had taken a right and fair stand on issues of civil interest and constitutional importance. He also avoided unnecessary confrontation with the government.

But he never shied away from speaking truthfully. However, even while handling controversial issues, Justice Ramana always managed to maintain good relations with the centre. The warm relationship between Justice Ramana and Union Law Minister Kiren Rijiju is not lost on anyone. Within a few months of becoming CJI, Justice Ramana took some important judicial and administrative initiatives that showed his intention to revive the judiciary.

Justice Ramana had advocated 50% reservation for women in the judiciary. He also referred to the low number of women in various levels of the judiciary and said that women are entitled to reservation in judiciary and law colleges as well. In a very charming and poetic note, he had said: “Women of the world, unite, you have nothing to lose except your chains”. This was followed up by a series of appointments and transfers of judges of both the genders, which has continued till date.

When deadly pollution was affecting people in Delhi-NCR and adjoining states, CJI Ramana took command to handle the situation. During the hearing on pollution, a three-member bench headed by him urged the central and state governments to work together. CJI Ramana for the first time changed the pollution narrative and held city dwellers responsible for pollution, instead of farmers. He refused to fine farmers for stubble burning and pollution.

In the context of the declining faith in the judicial system, CJI Ramana’s decision to constitute a judicial inquiry committee in the Pegasus espionage case was considered an important one. The bench of Justice Ramana, while giving its verdict on the petitions seeking an independent investigation into the alleged Pegasus espionage case, said that the espionage case will be investigated by a three-member committee. He added that the Court cannot accept spying of citizens.

A neglected part of the judiciary are tribunals. For years, judges were not appointed in tribunals. The Supreme Court strongly criticized the central government in the matter related to filling up of vacancies in tribunals. The bench said that the centre “cherry-picked” some names from the selection list prepared by the search-cum-selection committee and picked some names from the waiting list while ignoring the names in the selection list. The Court asked the attorney general to file a detailed affidavit on the appointments made by the government in which the government should also explain the process of selection of appointments and the reason behind those which have not been selected. The government dilly dallied, but the CJI was adamant. Today, appointments are being made regularly in the tribunals.

Justice Ramana never tolerated suppression of personal liberty. He always spoke for reformation of bail processes and the problems of prolonged incarceration of undertrials. As part of his initiative, he launched a software platform “FASTER’ for quick delivery of court orders to prisons across the country.

Along with sedition, another law whose provisions have been considered repressive is the Unlawful Activities (Prevention) Act, or UAPA. Many protesters and journalists have also come under the ambit of the UAPA. Related to the Tripura violence, a petition was filed in the Supreme Court against the use of UAPA. During the hearing, the CJI’s bench gave protection from arrest to all the petitioners, which included lawyers and journalists. This was another initiative of the CJI to challenge the status quo of oppressive laws, as well as an attempt to ensure the freedom of the citizens.

The issue of the security of the judges has become very important now. The way judges are being targeted in the court premises is worrying. Dhanbad, Madhubani and New Delhi’s Rohini Court were all in the news for violence. As CJI, Ramana took suo motu cognizance of the issue of security of judges and courts in the suspicious death of Jharkhand Additional District Judge Uttam Anand. Justice Ramana told Attorney General KK Venugopal that the judges of the country are being attacked not only physically, but also mentally. They are trolled on social media and threatened by intimidating messages on WhatsApp. Justice Ramana said that the security agencies are not working properly in this matter. He gave strict instructions to the government to tighten judges’ security.

Justice Ramana also never showed any leniency towards the misdeeds of the ruling elite. When the hearing was held in the Supreme Court on the issue of expediting the trial in the criminal case against MPs and MLAs, the bench headed by him expressed displeasure over the slow pace of hearing. Justice Ramana sternly said that no case will be withdrawn against MPs and MLAs without the permission of the High Court of the concerned state. One of his last major judicial interventions was when his bench stopped the anti-encroachment drive post the Jahangirpuri riots.

The National Judicial Infrastructure Authority of India, or NJIAI, is a project that is very close to his heart. He had made a proposal for arrangement of adequate infrastructure for courts, as per which there will be a governing body with CJI as patron-in-chief. The project is yet to be greenlighted by the government.

Justice Ramana was deeply hurt by the media attack and media trial of judges. He considered it as an irresponsible act of the media. At the Justice SB Sinha Memorial Lecture in Jharkhand, he said that the media is running kangaroo courts, and because of this, sometimes even experienced judges find it difficult to decide on a particular issue. The CJI said that the media is presenting news which is driven by agenda. This is not good for democracy.

The conflict between the judiciary and the government has always been there. Justice Ramana had said in this context that the Constitution has divided powers of the three organs of the state. Democracy will be strengthened only by harmony between them. No organ of state should cross the lakshman rekha.

About 48 hours before the clock clicked to his retirement day of August 26, a spate of judgments from the bench of Justice Ramana sought to clear the judicial desk, as it were. Five cases were heard by Justice Ramana and decisions delivered.

In the remission of Bilkis Bano convicts, a case of miscarriage of justice was made out. The plea had challenged the remission of convicts and sought its abrogation. The Justice Ramana-led bench issued notice to the Gujarat government and directed the 11 convicts to be added as parties to the case.

The first arrests in the case were made only in 2004 after the Supreme Court had handed over the case to CBI. Now once again Justice Ramana ensured that justice to Bano is not denied.

In the the infamous Pegasus spying case in October 2021, the apex court had turned down the Narendra Modi government’s appeal to be allowed to set up the probe committee. “Justice should not only be done, but seen to be done,”  CJI Justice Ramana had said. It had set up a court-appointed committee headed by former Supreme Court judge Justice RV Raveendran.

Now eleven months down the line, the committee reported that the Pegasus spyware was not found in the 29 mobile phones examined by it. The CJI-led bench also noted that Government of India did not assist the committee and reiterated the suggestion of the committee that a grievance redressal mechanism should be put in place to hear spying charges of citizens.

Another case which had attracted lots of attention was the top court’s verdict upholding the validity of provisions of the Prevention of Money Laundering Act (PMLA). The verdict upheld the stringent bail conditions in money-laundering cases. As a champion of citizens rights, CJI Ramana had recorded his concern in the matter. Now the CJI-led bench issued notice to the centre and ordered that interim protection granted to accused-petitioners would stand extended for four weeks.

In another much awaited case of security breach of Prime Minister Narendra Modi, the CJI Ramana-led bench shared with the Court, the probe committee report. The committee had held that the Senior Superintendent of Police (SSP) in Ferozepur failed to discharge his duty to maintain law and order. CJI Ramana decided to send to centre the committee’s suggestions to boost the prime minister security.

And finally, CJI Ramana heard the bail plea filed by activist Teesta Setalvad on her arrest for allegedly fabricating documents to frame high-ranking officials, including the then Gujarat Chief Minister Narendra Modi in the 2002 Godhra Riots cases. The matter was adjourned after the central government sought time to file a reply. The case was important as Teesta was arrested on the basis of a Supreme Court verdict which condemned her saying: “all those involved in such abuse of process need to be in the dock and proceeded with in accordance with law.”