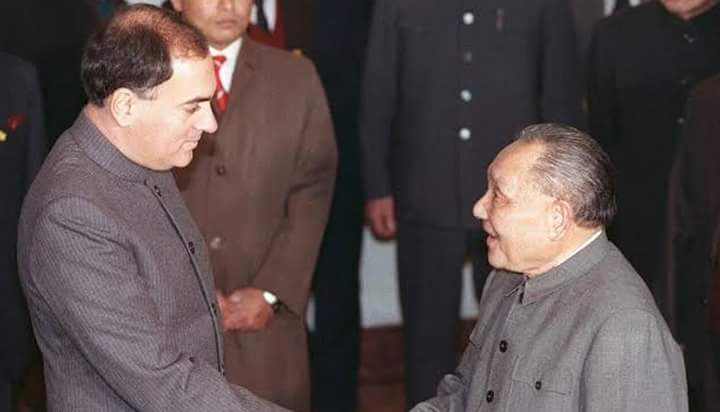 Recalling a breakthrough visit by the late Prime Minister Rajiv Gandhi to Beijing and how a new high in relations often precedes a new low.

Beijing was freezing cold on that December morning in 1988 when Rajiv Gandhi arrived in the Chinese capital to mark the first visit by an Indian prime minister to the country in 34 years. The weather was quite in keeping with the frosty re­lations between the two neighbours and there was no indication in the early ex­changes between the two sides and the official banquet that anything was about to change. That later turned out to be a vital lesson in the Chinese diplomatic playbook.

As part of the media delegation acc­ompanying the Indian prime minister, I had a front row seat to the inscrutable manner in which the Chinese conduct bilateral negotiations and their view of India. In 1988, China was just starting to open up to the world and its economy was still state- and party-led and inward-looking. The antagonism that had sculptured relations between the two giants since the 1962 conflict had suggested that any prospect of a Sino-Indian rapprochement was bleak, and the general feeling among Rajiv’s advisers and the diplomats accompanying him was that it would possibly be one step forward and two steps back. The Great Wall of Hos­tility was, it seemed, impossible to breach.

That it proved a historical visit and an ice-breaker was only evident on the last morning of the official visit. For that, a major share of the credit was not so much Rajiv’s as it was of the Grand Old Man of China—the 84-year-old, ailing Deng Xiaoping. If Rajiv deserves credit for taking the gamble of flying blind to Beijing, it was the all-powerful Deng who undoubtedly orchestrated the turning point during his emotion-charged meeting with Rajiv. What that signified was the importance and vision of one leader, not Communist-style party consensus and the Little Red Book. Rajiv had met the official leaders and the two sides had held extensive talks without any indication that things were going to change on the issue that was the elephant in the room—the tension on the border or Line of Actual Control and the stalemate in diplomatic relations. Here’s what I wrote then.

“The tension in the air was almost touchable as the two leaders converged from opposite ends of the cavernous Great Hall of the People. Deng, the famous pudding face animated by a twinkle in the eyes, shuffled forward, then stopped, realising Rajiv was still some distance away. The make-or-break enormity of the occasion was reflected in Rajiv’s mien as he moved hesitantly forward, his face set and exuding a certain nervousness. Throughout the three-minute-long handshake, he remained unsure and overawed, answering in monosyllables as Deng rambled into reminiscence.

In China, however, symbols and semantics are infinitely more important than official declarations. Deng’s opening remarks welcoming his ‘young friend’ and suggesting they ‘forget the past’ was an overt indication that he was literally holding out a hand of friend­ship. And the next few minutes of their meeting was broadcast through loudspeakers, not so much for the benefit of the world media as for China’s one billion people.

The fact that he spent 90 minutes with Rajiv discussing the chan­ging international scenario and his vi­sion of the balance of power was another signal. A semi-recluse, Deng rarely spends over 30 minutes with visiting leaders. Thus, without actually saying so, Deng was giving his blessings to a burial of the past and the start of another long march towards normalisation of Sino-Indian relations. After nostalgically recalling his meetings with Nehru and his dealings with Mrs Gandhi. Deng suddenly became serious, turned to Rajiv and said: ‘You are young. You are the future. We are receding into history. There is a new generation of leaders now and a global desire to live in peace and end conflict and tension. It lies in your hands to shape the destiny of the new world order. Use it wisely.’”

That China now is the world’s second biggest economy and in search of superpower status has changed the bilateral equation dramatically, and taken the two sides back to where they were before Rajiv’s visit. The lessons are obvious: China’s search for superpower status means that aggressiveness and power projection dictates every move they make. The biggest change in diplomacy has been China’s single-minded effort to weaponise its economy. In 1988, they had no such ambition, nor did they have the economic and military clout.

For the Chinese, friendship is never permanent but hos­tage to the country’s global ambitions. Under Xi Jinping, it has abandoned Deng’s mantra that China should “hide its brilliance and bide its time.” The current face-off in Ladakh shows that the 18 meetings between Prime Minister Modi and Xi and expressions of bilateral cooperation and peaceful coexistence mean nothing when global ambitions are in play. That has always been the case.

As I concluded in my 1988 report on the Rajiv visit: “The hands across the Himalayas are still loosely grasped. Rajiv’s visit has opened a chink in the bamboo curtain and only the coming months will tell just how durable the new warmth will be. In that sense, the ‘new beginning’ is very much like a Chinese banquet—appetising and savoury but full of unknown ingredients and a bewildering variety of unfamiliar dishes.”

Did you find apk for android? You can find new Free Android Games and apps.
Share
Facebook
Twitter
Pinterest
WhatsApp
Previous articleSC Notice To Authorities On J&K Bar Body Chief’s Plea Against His Detention
Next articleIs the EC Getting Robust?