The Big Fuss at Times Square 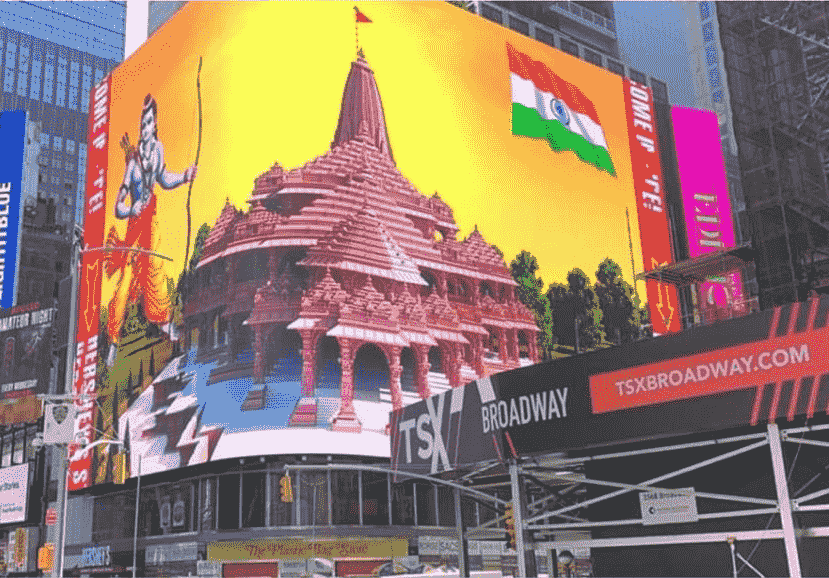 Times Square on this Wednesday morning in New York City looks pretty much as it has since early March when the pandemic caused New York to lockdown. Since then, this iconic location has been without tourists or theatergoers. Broadway Shows are closed for the remainder of the year putting some 2,50,000 workers, from actors to theatre ushers, on unemployment.

The big fuss came this week when some Indian American groups had the idea to buy time on some of the electronic screens that are hung on every building surface facing the Square to support a rally in conjunction with the ceremonies dedicating the Ram Mandir, a temple in Ayodhya. Anything involving Prime Minister Narendra Modi appeals to the Hindu segment of the NRI community in the New York area. Back in 2014, nearly 20,000 people turned out for a Modi speech at Madison Square Garden, a large sports arena there.

Igniting the fuss were twenty organisations and several individuals in the United States signing a letter to New York Mayor Bill de Blasio, opposing the display of the images of Hindu deity Ram and 3-D portraits of the temple.

“We write to bring to your attention an Islamophobic billboard set to be projected in Times Square in order to dehumanise Muslim New Yorkers and celebrate human rights abuses against Muslims in India,” the signatories said in their letter. “Our coalition stands opposed to the far-right Hindutva nationalism of the BJP government in India. We are writing to ask you how New York City, a city that claims to have inclusive and egalitarian values, can allow such a brazen celebration of hatred and Islamophobia.”

The signatories include Hindus for Human Rights and Coalition Against Fascism in India and spoke of the Babri Masjid demolition. “We request that your office take action to prevent an organisation called the American Indian Public Affairs Committee from projecting an Islamophobic billboard in Times Square which celebrates the destruction of nearly 425-year-old mosque that led to one of the worst communal violence India witnessed resulting in the death of nearly 3000 people.”

This letter caused Branded Cities to refuse to show images on the large screen normally used by a stock trading company. And they publicly condemned bigoted advertising. Unclear what other billboard companies decided to do.

It’s hard to get a crowd together in a pandemic. Times Square this year is no exception.