US elections: Power games from the Senate chair 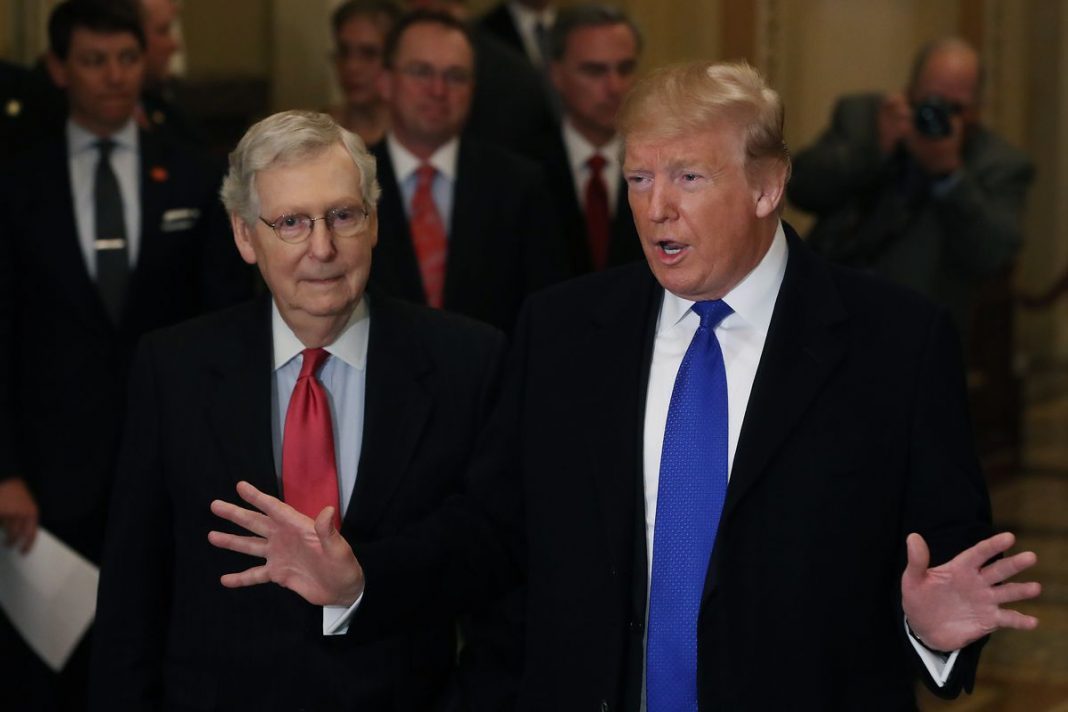 Republicans have already signalled that Senate Majority Leader Mitch McConnell thinks he will wield veto power over Biden’s Cabinet nominees. McConnell has done more than any human being in recent history to destroy Senate bipartisanship entirely, transforming American politics into a naked war for power.

Americans are easily confused by the Indian use of the terms Crore and Lakhs for big numbers, but for Trump Administration spokespersons, the difference between thousands and millions is irrelevant. Just pick a number that will please the president himself.

US President Donald Trump insists he did not lose the election to Joe Biden despite 5.3 million fewer votes, and the Electoral College at 306-232.

On Saturday, Trump supporters gathered in Washington to show solidarity with Trump’s refusal to concede or accept defeat in the election. The protest had several names— including Million MAGA March, Stop the Steal, and March for Trump —but they all had the same message: vote fraud stole the  election, a claim that has failed in a dozen court cases so far.

Kayleigh McEnany, the White House press secretary, tweeted support, saying, “More than one MILLION” people had gathered. Video footage from the events show, at most, tens of thousands of people present.

Back in 2016 when Spicer called Trump’s inauguration  “the largest audience to ever witness the inauguration—period. Both in person and around the globe,” there was shock because the poof of the lie was so obvious.

Now after four years of endless exaggeration and fabrication, it seems perfectly normal Trump team behaviour. Trump, who saw the demonstration from his car on the way to play golf, was less grandiose, claiming just “hundreds of thousands of people” participated in the march.

It might strike some readers as curious that when it comes to the Covid-19 pandemic the Trump administration downplays the big numbers being compiled in America.  The past week has seen a high of 150,000 new infections in a single day but has consistently stayed over 100,000 a day, for a total of 11 million cases in the USA so far. This is being called the third wave and it is bringing back various closures and lockdowns.  Trump said he would not lockdown anything because America has to get back to work despite 237,536 deaths to date.

He can say what he wants but the problem is about to become the priority for President-elect Joe Biden. Since Biden does not become president until January 20, 2021, he has urged Trump to stop complaining about the election and focus on the pandemic.

Biden has selected senior doctors and scientists as his transition pandemic team, but all they can do between now and the inauguration is plan, made more difficult by Trump’s refusal to let his people engage in the required peaceful transition of government.

Control of the US Senate is in Republican hands if they can hold onto both seats undecided pending a run-off election in the state of Georgia. The belief that this will cripple Biden’s presidency but fails to recognise that Biden still managed to win both the presidency and the largest popular vote mandate in American history despite GOP efforts to disenfranchise as many Americans as possible. Republicans have already signalled that Senate Majority Leader Mitch McConnell thinks he will wield veto power over Biden’s Cabinet nominees.

McConnell has done more than any human being in recent history to destroy Senate bipartisanship entirely, transforming American politics into a naked war for power. Most infamously, McConnell prevented Barack Obamaʼs final Supreme Court nominee, Merrick Garland, from even receiving a confirmation hearing, much less a vote, in 2016, calling it improper to do so in an election year. He subsequently jammed Amy Coney Barrett onto the court mere weeks before the 2020 election. Biden can, though, simply refuse to play McConnell’s game if he wants because there are two separate alternatives

These are the Vacancies Act and the recess appointment clause of the U.S. Constitution. The Vacancies Act has been used frequently by presidents of both parties as it allows a new president to choose from two groups of people to serve as “acting” secretaries: either any Senate-confirmed official (including dozens of sitting Democrats serving as commissioners at multimember agencies) or any senior civil servant who has served in that agency for 90 days and is paid at the GS-15 level or above.

Sensible senate approval of nominations would be preferable but with picks to appease McConnell because they cannot be expected to have Biden or the American peoples best interests in mind. This approach has some duration limits meanings there are likely to be more people swapping posts and portfolios.

Acting officials can ensure that Biden fulfils his mandate and launches a transformative agenda, no matter McConnell’s bad-faith manoeuvres. An acting treasury secretary could oversee CARES Act implementation— perhaps even funding a massive investment program using monies that have already been appropriated by Congress. An acting secretary of defense could ensure Defense Production Act appropriations go to provision of personal protective equipment, not jet engine parts. They could even lay down the infrastructure for an eventual vaccines distribution. An acting secretary of health and human services can dispel fears about an unsafe vaccine approved for the sake of political expediency, by putting the public health experts front and centre again. An acting secretary of education can unshackle tens of millions of Americans from student debt peonage. An acting attorney general can prosecute corporate corruption (e.g., Big Pharma), resuscitate civil rights laws, and enforce antitrust laws to help ensure the recovery from the current crisis does not enable corporate acquisitions and exacerbate inequality.