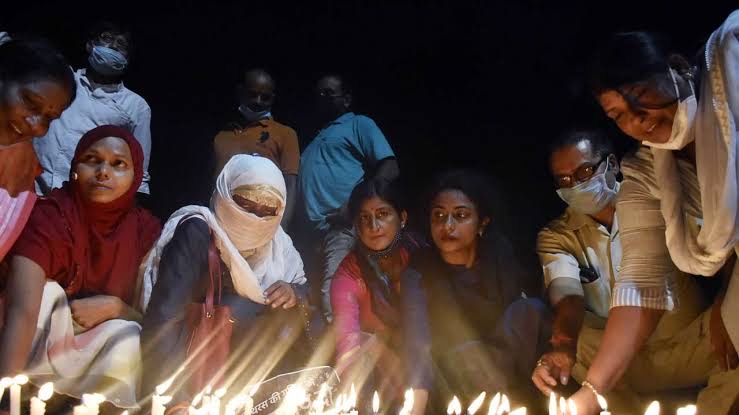 New Delhi (ILNS): The Supreme Court today reserved its order on a batch of petitions in the alleged Hathras gang rape and murder case. The issues under consideration by the court are: who would monitor the CBI, if the case should be transferred and which agency will provide security.

The bench comprising Chief Justice S. A. Bobde, A. S. Bopanna and V. Ramasubramanian was hearing a batch of petitions, among which the one filed by Satyama Dubey sought  the constitution of a Special Investigation Team (SIT) comprising sitting and retired judges of the Supreme Court to examine the killing of the 19-year-old Dalit girl in Hathras.

Advocate Seema Kushwaha, appearing for the victim, prayed that the trial be transferred to Delhi. She further urged the Court to direct the CBI to submit the investigation report directly before the apex court.

SG Mehta, however, objected to the second prayer and submitted that the CBI should be allowed to submit the report before the jurisdictional court in accordance with law.

Mehta further submitted that he had no objection if the investigation was conducted under the supervision of the apex court.

Senior Advocate Siddharth Luthra, appearing for one of the accused, urged that the court hear him. But Senior Advocate Indira Jaising, one of the intervenors, strongly objected about an accused getting the opportunity of being heard at this stage.

Luthra, however, retorted that Jaising’s application as an intervenor had itself not been accepted. Luthra further urged the Court not to allow disclosure of the investigation report to the media as it may lead to a media trial.

The bench, however, said that the accused should approach the High Court.

Since many applicants requested hearing, the bench said that “it does not require the assistance of the entire world in this case,” indicating that the parties should approach the high court instead.

Senior Counsel Harish Salve, appearing for the DGP, UP, submitted that the bench may depute any agency for protection of the family, but it shouldn’t be a reflection on the state’s fairness.

The bench has reserved its order on the following questions:

– Who should monitor the CBI probe? The toss up is between the Allahabad High Court and the Supreme Court.

– Whether after completion of the probe the trial should be transferred to Delhi.

– Whether the UP Police or the CRPF should provide security to the victim’s family members and witnesses.