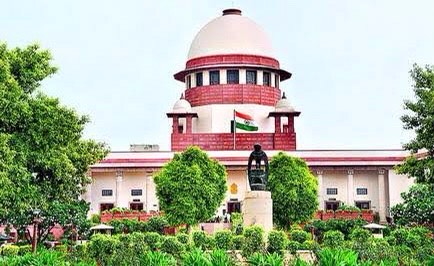 A bench of the Supreme Court comprising Justice DY Chandrachud, Justice MR Shah reserved its order in a plea filed by Arnab Goswami seeking quashing of FIR filed against him for disturbing communal harmony over the gathering of Migrants in Bandra. The interim protection granted to Goswami will continue to operate till order is pronounced.

The FIR has been filed by Irfan Abubakar Shaikh, secretary of the Raza Educational Welfare Society for allegedly disturbing the communal harmony  over the issue of gathering of migrant workers in Mumbai’s Bandra.

Senior Advocate Harish Salve appearing for Arnab Goswami informed the bench that “There is a fresh petition and an earlier one also, the incident is of April 16 of a show telecasted on TV. There are a number of FIRs against the petitioner for his show”

Salve urges the bench to grant anticipatory bail to Goswami submitted that  “On April 25, a notice was served to his client requiring his presence in the case before police for questioning. Nature of FIR shows it’s an arm-twisting tactic. They have interrogated him for 12 hours”

“Certain tweets against the petitioner came out in the public domain. It is worrying to see what he was being asked. The news involves public, which the public must know” Salve adds.

He further submitted that it was surprising to see the police questioning over a telecast. He further informed the bench that out of the two officers who were interrogating Goswami, one has been tested COVID 19 positive.

Moreover the kind of questions that were being asked in the Police station for a period of 12 hours could have been asked via Video conferencing, Salve further added.

Justice Chandrachud to Salve- “All these points, can be put across before the HC. Either in an anticipatory bail or quashing of the case, whatever you like.”

Salve urged the bench to consider his prayer in the light of Article 19 (1)(a). He further submitted that If a comment is made which has a communal overtone, can the police and CRPC, without any checks and safeguards be applied to telecast an opinions on TV, print and writing?

Justice DY Chandrachud answering Salve’s query said “We must draw a balance between both. We can give you the liberty to move to the Bombay HC, after the expiry of the interim protection we had already given.”

Justice DY Chandrachud further said “This is not just in relation to petitioner. We must ensure somebody is not subject to harassment, but we should not create an environment where anybody in particular is exempted from the normal course of proceedings.”

Salve urges the bench to transfer the palghar incident remark case to CBI considering the seriousness that have been made by the petitioner against the police.

Senior Advocate Kapil Sibal interjects, “Then in that case, if investigation gets transferred to CBI , Investigation will go into your hands! “

Solicitor General Tushar Mehta objects, says he has serious reservations against this statement.

Salve on Sibal’s comment says “Mr. Sibal’s statement shows the need to transfer the case to CBI. This is a political problem between state and centre and I have been caught in a crossfire”

Salve further questioning the course of investigation adopted by the police submitted “Why was I asked the details of my editorial team and content by Police? CEO of the company was questioned for over 6 hours. What has a CEO of a company got to do with a news telecast that purportedly caused communal problems?”

Salve further adds “Investigating Officer wanted to know who decides the list of guests, news gathering procedures. Financial details were being asked about the company, including the equity and other details. There has to be a balance between Article 19(1) (a) and sanctity of the criminal investigation. Either hear our matter on merits or transfer the matter to CBI. There could be a chilling effect on the freedom of press.”

Solicitor General Tushar Mehta submitted that both the parties were accusing him and he as a law officer had no sides to take. He further says that the case is of a peculiar nature since the accused had no faith in police and the police had to come to court to “insulate” its investigation.

SG however agreed with the petitioner that 12 hours questioning was really disturbing.

Senior Advocate Kapil Sibal submitted that there are most unique ways to deal with the investigation in a case. Asking questions did not amount to harsaament.

He further submitted “Stop this communal violence and communal mongering. Decency and morality you need to follow. You are stigmatising people by way of sensationalising things. Making allegations against Congress. Clearly communal”

SG Mehta suggests that if a prima facie case is made out against Goswami then the only solution is to transfer the case to the CBI. This was the accused would not allege harassment and the agency would not need insulation from threat.

Salve urging the Court to transfer the probe to the CBI submits that the action against Goswami is a concerted action by one political party against a journalist.

Did you find apk for android? You can find new Free Android Games and apps.
Share
Facebook
Twitter
Pinterest
WhatsApp
Previous articleSC No To Restoration Of 4G Internet In J&K, Sets Up Committee To Find Remedy
Next articleCentre Forms A Special Committee For Criminal Law Reforms