Indianization of justice delivery system is need of the hour: CJI NV Ramana 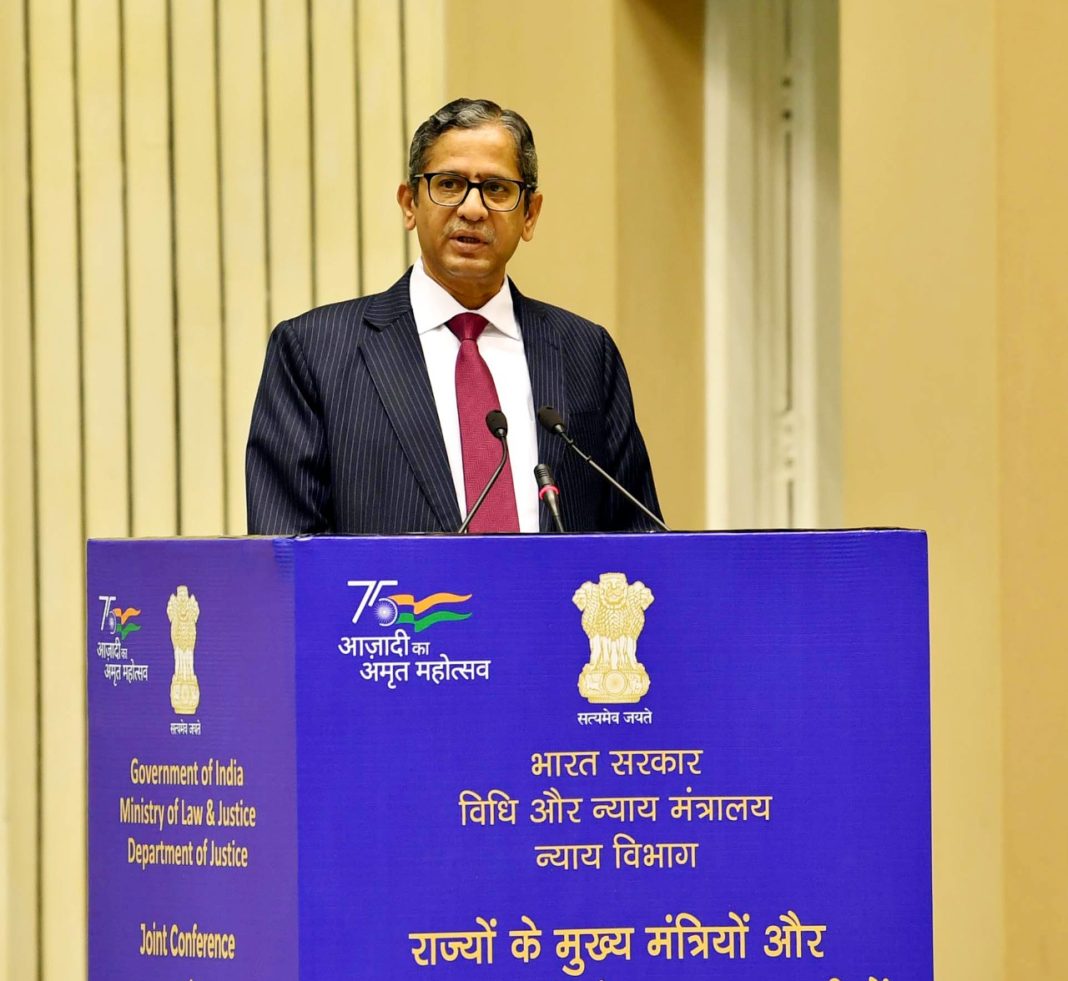 Chief Justice of India Justice N.V. Ramana on Saturday addressed the inaugural session of the joint conference of Chief Ministers and Chief Justices of High Courts at Vigyan Bhawan in New Delhi. Prime Minister Narendra Modi along with many other legal luminaries were present to grace the occasion.

The CJI in his speech mentioned that this conference is an opportunity for all present in the session to learn from their rich experience, knowledge, and wisdom that they are a live link with the people and a great opinion builder.

The CJI said that Chief Ministers often come across the grievances of people which includes those which are related to judiciary so, it should be a great practice if the judiciary can be enlightened about the expectations of the people. CJI Ramana was very keen to identify and address the existing issues to improve the functioning of Judiciary.

“All of us are constitutional functionaries and we abide by the constitutional mandate. The role assigned to each of us needs no re-iteration. The Constitution provides for separation of powers between the three organs – clearly outlining their sphere of functioning, delineating their powers and responsibilities.”

CJI Ramana further said that while discharging our duties, we all must be mindful of the Lakshman Rekha. The judiciary would never come in the way of governance, if it is in accordance with law. We share your anxiety and concern regarding the welfare of the people.

Talking about the Judiciary, the CJI mentioned that a country like India having population of 140 crore has a wide range of issues which no other constitutional court can see so this is a huge test for us. He quoted the first Chief Justice of India, Justice Harilal Kania, who had once said: “This court will be called upon to discharge its duties as perhaps no other Court has so far been called upon to do so.”

About the challenges facing the judiciary, the CJI said that sometimes they are confronted with the issue of the executive willingly transferring the burden of decision on them, which although is not their work, but still has to be addressed as court cannot say no to a prayer for addressing grievance. He further added that ambiguities in legislations also add to existing legal issues. If the legislature passes a law, with clarity of thought, foresight and with people’s welfare in mind, the scope for litigation gets minimized.

“Laws should be made after thorough debates and discussions, incorporating the needs of the aspirational sections of the society.”

Also Read: Judiciary is the guardian of Constitution: PM Modi

The CJI said he is a strong proponent of “Indianization of the Justice Delivery System” which is a multidimensional concept which calls for the inclusivity, providing access to justice, removal of language barriers, reforms in practice and procedure, development of  infrastructure, filling up of vacancies, augmenting the strength of the judiciary and so on.

He said that he firmly believes that with the expanding economy and growth in population judicial infrastructure,both in terms of personnel and physical infrastructure, needs urgent attention as the the caseload is rising alarmingly.

He talked about the severe gap between the existing infrastructure and the projected justice needs of the people.

Talking about women and judges, he said, “The environment of some District Courts is such, even lady advocates feel apprehensive about entering court rooms, let alone female clients.” He further added that Courts are a temple of justice and should be welcoming

He said we must acknowledge that the Union Government has been making reasonable budgetary allocation through its Centrally Sponsored Scheme for this purpose but what is needed is more streamlined,  accountable and organised structure.

The CJI said that another important factor in promoting access to justice is filling up of judicial vacancies and increasing the sanctioned strength of judges.

Talking about the latest situation CJI mentioned, “As of today, out of 1104 sanctioned posts of High Court Judges, there are 388 vacancies.” He said that from day one, it has been his endeavour to fill judicial vacancies.

He said: “We have made 180 recommendations, for appointments in various High Courts during the last year. Out of this, 126 appointments have been made.”

CJI Ramana mentioned that unless the foundation is strong, the structure cannot be sustained. He said that increase in number of judges can clear the pendency along with quick justice.

CJI Ramana touched another important point of inclusivity. The judiciary, as well as every other institution of our democracy, must mirror the social and geographical diversity of the country. He said that we have been receiving many representations for introducing local languages in proceedings before the High Courts and now it seems to be a right time to revisit the demand and take it to logical conclusion. The practice of law before Constitutional Courts should be based on one’s intelligence and understanding of law, and not mere proficiency in language.

Talking about the legal fraternity, the CJI said, “I am proud to state that, India has one of the best free legal aid services in the entire world”

About the lumanaries in the field of law, he spoke about Justice U.U. Lalit, who has done some tremendous work in Legal Services Authorities, Justice A.M. Khanwilkar, who has been contributing immensely, by strengthening the Supreme Court Legal Services by deploying modern technologies. Justice Chandrachud, who has been adding huge value through the e-courts project and whose efforts will ultimately lead to the much needed modernization of the Indian judiciary. Justice L. Nageswara Rao, who has been heading a committee on artificial intelligence, whose work I believe is going to revolutionise the way the judiciary functions. “I thank each one of them,” he added.

To the Chief Ministers and Chief Justices , CJI Ramana said, “It is the active collaboration, based on our collective wisdom, that can take us forward”.

He quoted Aristotle: “Law should govern, and those in power should be servants of the law.”

He extended his thanks to President Ram Nath Kovind who has always been a pillar of support for Judiciary as he being a lawyer has a practical understanding of the Indian legal system and has always been extremely supportive of all our endeavours.

The CJI also thanked the Prime Minister who took time from his busy schedule to share his thoughts on this occasion.  I thank him for his continued support to the judiciary.

Law Minister Kiren Rijiju deserves special thanks for promptly responding to my suggestion to bring together the Chief Ministers and the Chief Justices for this event, CJI said.

CJI Ramana thanked everyone who gathered to make this event a great forum.

Ending his speech, the Chief Justice quoted Mahatma Gandhi: “Man becomes great exactly in the degree in which he works for the welfare of his fellow men.”

Did you find apk for android? You can find new Free Android Games and apps.
Share
Facebook
Twitter
Pinterest
WhatsApp
Previous articleCalcutta High Court directs DG Environment and Heritage to consider petition regarding change in nature of land
Next articleThe Row over Death