“While I’ll be a Democratic candidate, I’ll be an American president”: Joe Biden 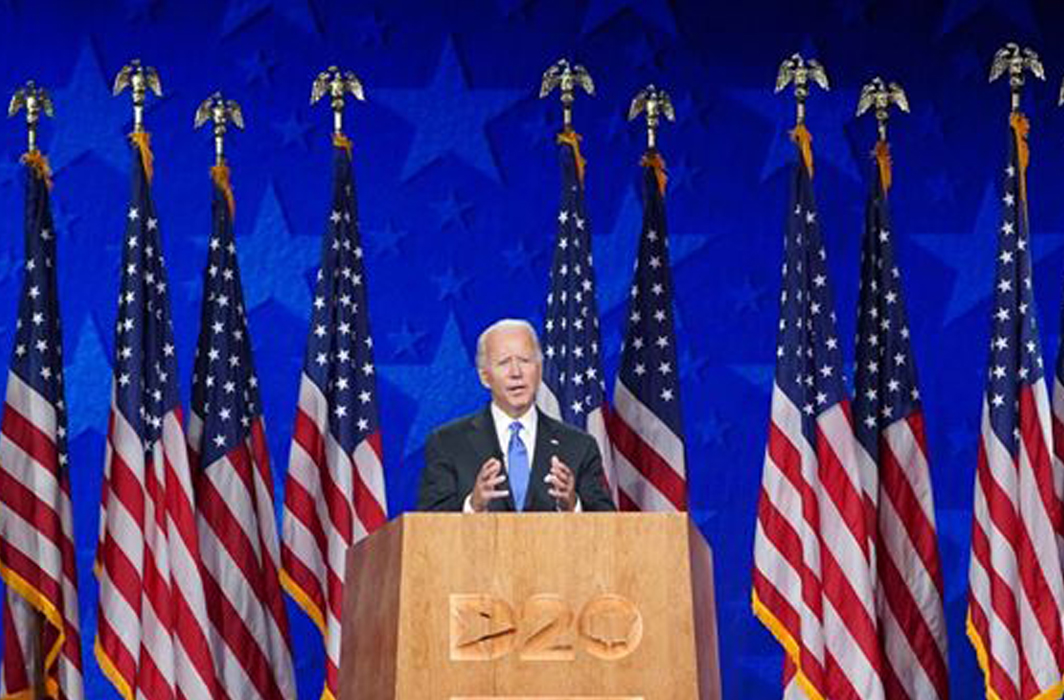 On the final night of the national convention of Democrats, the presidential nominee presented a strong, coherent and warm message of empathy and leadership in accepting the opportunity to challenge Donald Trump for leadership of the United States

An almost flawless virtual convention produced like an infomercial selling light-hope versus darkness-chaos was everything that presidential hopeful Joe Biden needed. The effort was to shift moderate voters, suburban moms and angry Republicans into voting this time for a Democrat.

What we saw was not the elderly and doddering candidate described over and over by Donald Trump. Biden presented a strong, coherent and warm message of empathy and leadership in accepting the opportunity to challenge Donald Trump for leadership of the United States.

Biden made it crystal clear that the economy, schools, any sense of normalcy rested with containing the virus. He promised a national mask mandate if elected, essentially telling the most fervent Trump voters to stick with their hero but wear a mask.

President Trump tweeted negative comments during the four-day convention. His performance in next week’s Republican virtual convention will probably trivialise Biden’s age and skill. With more than 1,70,000 Americans dead from the pandemic, this may not necessarily be a productive space for a president with questionable leadership skills, especially from a scientific perspective.

The Republican convention is likely to be noisier and angrier than the humane and calm presentation carefully crafted by the Democratic team. It is reported that Trump is planning a fireworks display in Washington next week as he gives his address on Thursday night on the South Lawn of the White House.

Both Biden and his running mate Kamala Harris delivered strong keynote speeches to an empty room. The lack of applause did not deter them. Trump, who feeds off applause at his campaign rallies, has rarely delivered a teleprompter speech with a sense of conviction, except when he has wandered off into ad lib territory.

The apparent guiding principle for the Democrats was to present Biden as the Un-Trump with a large supporting cast of normal Americans as well as politicians talking about their candidate’s inherent decency and compassion. Biden put it this way: “While I’ll be a Democratic candidate, I’ll be an American president” to contrast with Trump, who frequently seems to only govern for, or speak to, his base of support.

Biden’s speech reflected the impact of the Black Lives Matter movement calling for an end of systemic racism in America. People appearing in the convention video represented a wide range of age, sex, race and cultures but it seemed short of Muslim Americans. While he talked about anger and inequality as issues for younger voters, the overall effort was to assure independent and suburban voters of a better America in his approach.

When Trump gave his acceptance speech four years ago he described a dystopian America of carnage and rage and promised, “Only I can fix it.” For Americans who feel that unemployment, lockdowns and pandemic death are ever present, the Biden message is that only “we as a people together can fix it.” The previous night, former President Barack Obama made an uncharacteristically impassioned plea for the need to save democracy.

Cameo appearances came from people as varied as Stephen Curry, the basketball star, Mike Bloomberg, an early primary aspirant and philanthropic supporter of Democrats and liberal organisations, and most of the Democratic hopefuls all imploring their supporters to stay united behind Biden-Harris.

For all the pre-convention chatter about risks with the format, the feeling after watching it end-to-end for four straight nights is that it was a success and a welcome change from the artificial rah-rah of past conventions. It is, however, a long 75 days to the election, meaning many things can happen that may affect voting behaviour.